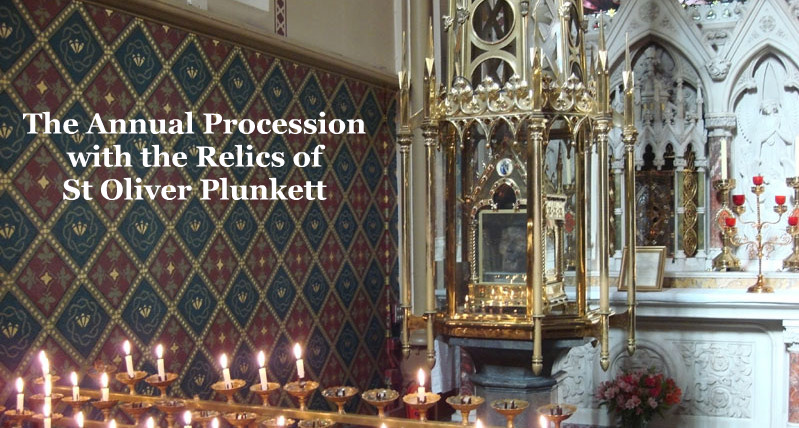 The Annual Procession with the Relics of St Oliver Plunkett takes place in Drogheda on Sunday 7th July.

This year the Procession begins on the Meath side of the town – from the Holy Family Church, Ballsgrove – at 3.00 pm.

It proceeds across the River Boyne to St Peter`s Church, the Memorial Church of St Oliver Plunkett, for Mass at 4.00pm.

Cardinal Brady will be Chief Concelebrant with the Papal Nuncio as Homilist and the Bishop of Meath, Dr Michael Smith.

All priests are welcome to concelebrate this Mass in honour of St Oliver.

St. Peter’s Church
The National Shrine to St. Oliver is located in St. Peter’s Church, Drogheda otherwise known as the
St. Oliver Plunkett Memorial Church. The church was one of the last of the gothic churches to have been
built and as such it incorporates many of the finer aspects of gothic architecture. Built by parish priest, Mgr.
Robert Murphy in the late nineteenth century; it is regarded today as a masterpiece of beauty and design. Its
interior was decorated by his successor, Mgr. Patrick Segrave in the early twentieth century and his work is
also regarded as exquisite in both taste and in finish. A similar building of design and adornment, could not
be built by the people of Drogheda today because of the astronomical costs such a project would entail.
A couple of years after St. Oliver’s martyrdom, the Relic of the Head was brought to Rome and
remained there for about forty years, until it was given into the care of the new community of Dominican
nuns at Siena convent in Drogheda, c.1725. The nuns were under the leadership of Sr. Catherine Plunkett a
relative of St. Oliver and believed to have been his grand niece. The community had shortly beforehand
moved from a mud cabin on the south side of the Boyne to a more substantial house in Dyer Street and they
were living surreptitiously as a group of women, so as to avoid any difficulties with the authorities. For the
following two centuries, this community proved their resourcefulness and devotion by faithfully preserving
and venerating this priceless relic of the Irish Church, throughout the difficulties of penal times. During the
war of independence because of a fear that some of the notorious Black and Tan forces might steal or
desecrate the Relic, armed republican forces were positioned in its defence, in the locality of the Siena
community at Chord Road, this being in an era of attack and reprisal. Within months and to the great
disappointment of this community, the Relic of the Head was transferred in 1921 to the newly built, St.
Peter’s Church, Drogheda, the Memorial Church of St. Oliver, where it was installed in a side altar.

National Shrine to St. Oliver
The Relic of St. Oliver’s Head now stands in an impressive new shrine, which was erected in 1995.
Pilgrims have the opportunity to walk around the shrine and view at close quarters this precious relic of the
Irish church. One can also view the original document of authentication of the relics, which was signed
shortly after St. Oliver’s martyrdom, by Elizabeth Sheldon and surgeon John Ridley. After St. Oliver was
hung, drawn and quartered at Tyburn, the Head was thrown into the prepared fire nearby. His friends
quickly retrieved it however and scorch marks from the fire may still be seen on the left cheek of the Head.
The Head is heavy and not just a bare skull and is in remarkably good condition considering that it has
never been hermetically sealed. The Shrine at Drogheda also includes some bone relics of St. Oliver,
donated by the Benedictine Community, Downside around the time of his canonisation. Overhead is the
Canonisation Picture, which hung from the balcony of St. Peter’s Basilica in Rome during the canonisation
ceremony on October 12th 1975. In a glass cabinet nearby, is the door from the condemned cell of Newgate
Prison, London and St. Oliver would have been in this cell as a condemned man for the last few weeks of
his life. Renowned for his letter writing, it was during this time that St. Oliver wrote his most poignant
letters. He also wrote during this time, his last speech, which he delivered from the gallows at Tyburn and is
famous for showing forgiveness to all those who had anything to do with his death.
Thousands of pilgrims visit the National Shrine of St. Oliver each month, making it one of the most
popular attractions in Ireland. Coming from all counties of Ireland and various parts of the world; some
come as sightseers, but many go away with an admiration for the loyalty in faith of those who have gone
before us. Many pilgrims come to pray for various petitions and light candles. Some come to give thanks to
St. Oliver for his intercession and for favours already received. [email protected] Many
come to kneel and pray for peace and reconciliation in Ireland, before the Shrine of our patron saint for this
cause in Ireland.
Many dignitaries also come to pray at the Shrine of St. Oliver. Pope Paul VI at the canonisation
ceremony in 1975, recalled a visit he made to the shrine some years earlier as Cardinal Montini. The
President of Ireland, Mary McAleese has prayed at a service for peace and reconciliation at the Shrine, and
there have been many other such prayer ceremonies at the Shrine. On the first Sunday of July each year, the
annual celebration takes place at the Shrine, with a procession and Mass, commencing at 3pm.