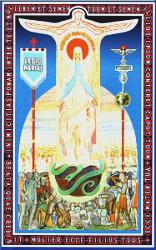 “Yours is an eminently Marian spirituality, not only because the Legion glories in carrying Mary’s name as its unfurled banner, but above all because it bases its methods of spirituality and apostolate on the dynamic principle of union with Mary, on the truth of the intimate participation of the Virgin Mary in the plan of salvation. In other words you intend to render your service to every person, who is the image of Christ, with the spirit and the solicitude of Mary.”
(Pope John Paul II – Address to Italian Legionaries, 30th October 1982)
The Legion of Mary was founded in Dublin, Ireland on 7 September 1921. It is a lay Catholic organisation whose members are giving service to the Church on a voluntary basis in almost every country.

The object of the Legion of Mary is the glory of God through the holiness of its members developed by prayer and active co-operation in Mary’s and the Church’s work.

The unit of the Legion of Mary is called a praesidium, which holds a weekly meeting, where prayer is intermingled with reports and discussion. Persons who wish to join the Legion must apply for membership in a Praesidium.

The Works of the Legion

The Legion sees as its priority the spiritual and social welfare of each individual. The members participate in the life of the parish through visitation of families, the sick, both in their homes and in hospitals and through collaboration in every apostolic and missionary undertaking sponsored by the parish.

Every legionary is required to carry out a weekly apostolic work in the spirit of faith and in union with Mary.

“For all states of the laity the perfect example of spiritual and apostolic life is the most Blessed Virgin Mary, Queen of the Apostles, who while leading the life common to all here on earth, one filled with family concerns and labours, was always intimately united with her Son and in an entirely unique way co-operated in the work of the Saviour…All should devoutly venerate her and commend their life and apostolate to her maternal care.”
(Apostolicam Actuositatem, Decree on the Apostolate of the Laity – 18 November 1965)

This membership is open to Priests, Religious and lay people who wish to associate themselves with the Legion by undertaking a service of prayer in its name.