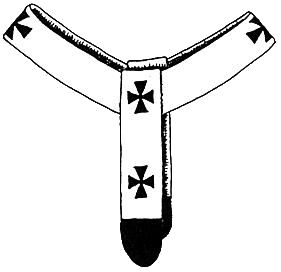 Archbishop Eamon invites you to join him at his formal investiture with the pallium in St Patrick’s Cathedral Armagh at 7.00 p.m. Mass on Saturday 4th July 2015.

Pope Francis will bless and present the pallium to Archbishop Eamon privately after concelebrated Mass in St Peter’s Basilica, Rome on the Feast of St Peter and St Paul, 29th June.

Archbishop Eamon will return to Armagh for the formal investiture by Archbishop Charles Brown, Apostolic Nuncio to Ireland, in the presence of bishops and representatives from the nine dioceses in the ecclesiastical province of Armagh, including our own.
The pallium is a white woolen strip, worn around the Archbishop’s neck, which symbolises the bond between an archbishop and the Pope. The wearing of the pallium dates back to the fourth century. It predates the miter and the crozier as episcopal symbols.