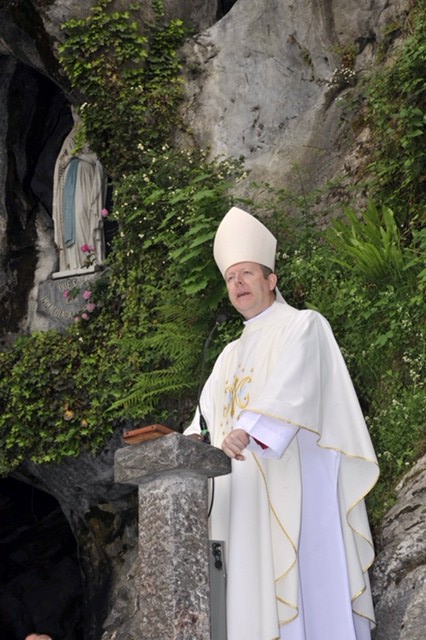 “We asked that the next Assembly give focused attention to the importance of respect for freedom of religion and conscience as a fundamental pillar of a genuinely free, diverse and democratic society” – Archbishop Eamon Martin

Today Archbishop Eamon Martin, Archbishop of Armagh and Primate of All-Ireland, led a delegation from the Northern Ireland Catholic Council on Social Affairs (NICCOSA) for the first official meeting between representatives of the Catholic Church and the new leader of the Social Democratic and Labour Party (SDLP), Mr Colum Eastwood MLA. The meeting took place in Belfast.

Speaking after the meeting, Archbishop Martin said that the Church delegation welcomed the opportunity to discuss a range of issues with the party, including “the shocking increase in levels of childhood poverty during the mandate of the last Assembly and the SDLP’s positive commitment to building a culture of life and care”.

Archbishop Martin continued, “This is the first in a round of meetings our Council on Social Affairs is having with the political parties in the North over coming weeks. We want to support politicians in their noble vocation of building a better society and to explore how we as a Church, with other faith communities and civic groups, can work together with politicians in the next Assembly to address the many challenges confronting our society. We highlighted in particular the growing levels of childhood poverty in Northern Ireland and the increasing gap between rich and poor, as well as the continuing challenges of sectarianism, reconciliation and dealing with the past. Referencing the loss of the mechanisms for ongoing civic engagement promised in the Belfast [Good Friday] Agreement, we encouraged the party to look at ways of widening participation in the policy making processes of the next Assembly and in building a more positive, inclusive and outward looking civic and political culture. We also expressed our concern at the lack of attention being given to the persecution of Christians across the world, especially in the Middle East. We asked that the next Assembly do more to highlight this issue and to also give focused attention to the importance of respect for freedom of religion and conscience as a fundamental pillar of a genuinely free, diverse and democratic society.”

Ms Deirdre O’Rawe, a member of NICCOSA, said, “The delegation affirmed the Party’s consistent position throughout the Troubles of upholding the right to life as the most fundamental of all human rights. The Church delegation also welcomed the affirmation by the SDLP that it will continue to uphold its position on abortion as expressed in the most recent vote in the Assembly, in which the Party defended the right to life of severely disabled children in the womb who have life-limiting conditions”. She went on to say, “we encouraged the SDLP to stay true to its position of respecting the absolute sanctity of human life in all circumstances and for promoting a response to crisis in pregnancy that is marked by compassion, care and equal respect for the life of a mother and her unborn child. We also welcomed the Party’s interest in exploring the proposal to develop a wider range of peri-natal hospice services in Northern Ireland to provide world-class support, counselling and care to every family facing the diagnosis of a life-limiting condition in pregnancy. We shared our conviction that the best possible future for humanity lies in building a culture of life and care in which the dignity of our beginning and end as persons is reverenced and respected, rather than in a culture where the value of life is cheapened and destroyed.”

Mr Malachy McKernan, a member of NICCOSA and of the Society of Saint Vincent de Paul, said that the Church delegation had asked the SDLP to make addressing child poverty and the widening gap between rich and poor the first priority of the programme for Government in the next Assembly. Mr McKernan said, “The Church and church-based organisations such as the Saint Vincent De Paul are at the front-line of responding to poverty every day. The hidden tragedy is that it is getting worse, not better. It is shocking that after so many years of relative stability and peace, the number of children living in poverty in Northern Ireland is still the worst on these islands and is even increasing and that the gap between rich and poor in Northern Ireland is getting wider. Poverty has all sorts of social, health, education and employment consequences. It brings additional costs to almost every Government department. It simply doesn’t make sense morally or economically for our politicians not to address poverty as a top priority. As we said to the members of the SDLP, it is no accident that Pope Francis was recently voted the most popular leader in the world. He is showing the way. He is making the voice of the poor heard across the world and that is what the Church was doing at the meeting with the SDLP today.”

Ms Eileen Gallagher, a member of NICCOSA with wide experience of peace and reconciliation work, concluded by saying, “This was a very positive and helpful meeting with the SDLP, a sign that politicians and church organisations can both benefit from regular dialogue with one another. We look forward to similar meetings with the other parties. We spoke to the SDLP about a wide range of other issues, including the importance of caring for the environment as Pope Francis has recently asked us to do, and of addressing the needs of the victims of the Troubles – once and for all – early on in the new Assembly’s term. The Church delegation also proactively raised the issue of the Historical Institutional Abuse Inquiry and the need to ensure adequate support for victims and survivors of abuse. The Party and the Church delegation agreed to meet again in the future.”

· Today’s meeting with the SDLP is the first in a series of meetings scheduled to take place during April 2016 between the Archbishop and lay members of NICCOSA, with the main political parties in Northern Ireland.