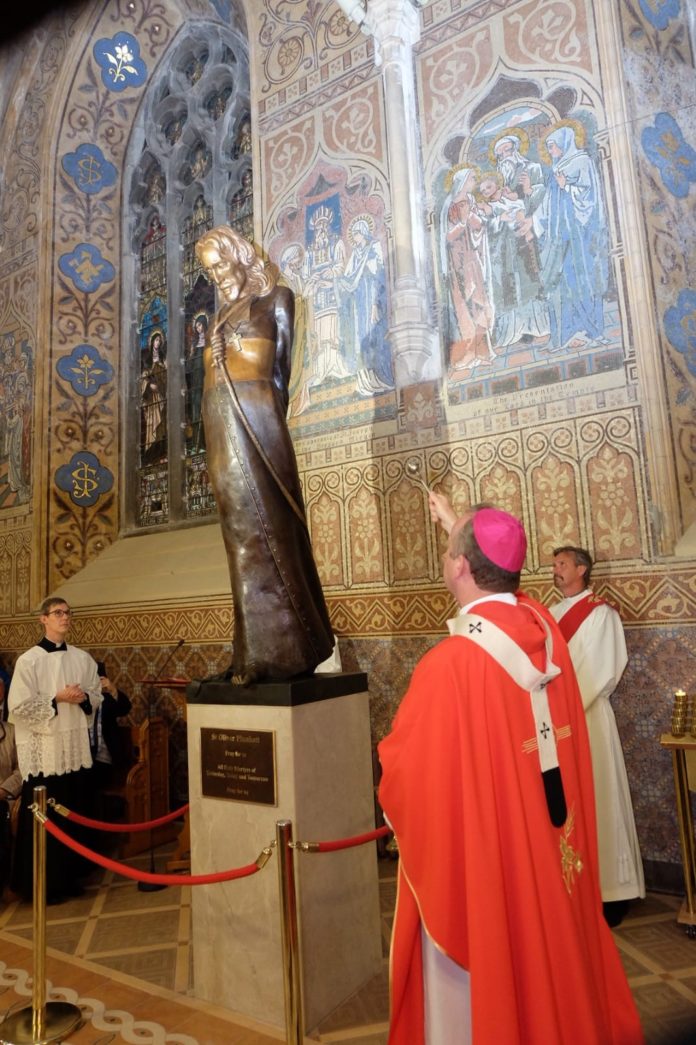 Archbishop Eamon Martin, Archbishop of Armagh, Apostolic Administrator of Dromore and Primate of All Ireland, unveiled a new statue of Saint Oliver Plunkett in Saint Patrick’s Cathedral Armagh on 9 July 2019 to honor the martyrs of yesterday, today and tomorrow.

Last November, during a Mass to remember persecuted Christians, I announced my hope for a shrine here in Saint Patrick’s Cathedral, Armagh, to our former Archbishop, Saint Oliver Plunkett, to help us remember in prayer all those who are persecuted for their faith.

Saint Oliver was appointed Archbishop of Armagh on this day, 350 years ago – 9th July 1669.  For many years the people of Drogheda and the surrounding areas in Louth and Meath have faithfully kept his memory alive; Saint Peter’s Church in Drogheda will continue to be the National Shrine to Saint Oliver Plunkett, where his relics are venerated.  But in this significant year I think it is appropriate that we acknowledge Saint Oliver in a special way here in our Cathedral, and, through him, honour all the martyrs of “yesterday, today and tomorrow”.

We commissioned the Dublin-born artist, Dony MacManus, to prepare the bronze sculpture which will be unveiled, blessed and dedicated this evening at the end of Mass.

I asked Dony if he could inspire both devotion and admiration for the courage and serenity shown by Saint Oliver in face of such an horrific execution.  Secondly, I wished that his work would speak into the reality of Christian persecution today; but, most importantly, I asked Dony if he could help us to see, in this sculpture of Saint Oliver, the face of our Saviour Jesus Christ, who humbly gave His life for us on the Cross.

I am grateful to Dony for bringing all his God-given talents to this task, and also for the prayerful way in which he has approached his work.  I also thank the many people from all over Ireland and beyond who have made this commission possible by their prayers and financial support.

In the days, months and years to come, countless visitors to the Cathedral will have an opportunity to share in the fruits of Dony’s efforts.  This sculpture is much more than a work of art.  I trust that it will draw us to prayer for our brothers and sisters around the world who are suffering for their faith; and I hope in that way that we will all feel called to witness more strongly in our daily lives to Jesus Christ, who loved us ‘even unto death’.

The life and death of Saint Oliver reveals to us the face of Christ.  At his canonisation on 12 October 1975, Pope Paul VI – now Saint Paul VI – said that, “the sacrificial love of Jesus Christ, the Good Shepherd, is reflected and manifested in this new Saint”.  He said Saint Oliver is “for the entire world, an authentic and outstanding example of the love of Christ … He laid down his life out of love, and thereby freely associated himself in an intimate manner with the sufferings of Christ.  Indeed, his dying words were: ‘Into thy hands, O Lord, I commend my spirit. Lord Jesus, receive my soul.’”

Historians tell us that Archbishop Oliver was a devoted shepherd, attentive to the sanctification of his clergy and enthusiastic for the education and Christian instruction of young people.  His message was one of peace and reconciliation.  Pope Paul VI described him as a “vigilant preacher of the Catholic faith” and a “champion of pastoral charity”.

Four years later, Pope Saint John Paul II who, as Cardinal of Cracow, had been to Oliver’s canonisation, came to Drogheda and venerated the new saint’s relics.

There he said: Saint Oliver “was the defender of the oppressed and the advocate of justice, but he would never condone violence.  For men of violence, his word was the word of the Apostle Peter: “Never pay back one wrong with another” (1 Pt 3 :9).  As a martyr for the faith he sealed, by his death, the same message of reconciliation that he had preached during his life.  In his heart there was no rancour, for his strength was the love of Jesus, the love of the Good Shepherd who gives His life for his flock.  His dying words were words of forgiveness for all his enemies”.

And this is so true.  At the gallows in Tyburn, London, in 1681, Oliver began his final message by rejecting the fraudulent charges and false testimony that had been brought against him.  But then, his words turned to forgiveness.  Archbishop Oliver said:

“I do heartily forgive them, and also the judges, who by denying me sufficient time to bring my records and witnesses from Ireland did expose my life to evident danger.  I do also forgive all those who had a hand in bringing me from Ireland to be tried here, where it is morally impossible for me to have a fair trial.  I do finally forgive all who did concur directly or indirectly to take away my life; and I ask forgiveness of all those whom I ever offended by thought, word or deed”.

Dear brothers and sisters, it is clear that Archbishop Oliver, by his life and his death, had become “conformed to the likeness of Christ” (Romans 8:29).  He was the true shepherd, described by the prophet Ezekiel in this evening’s First Reading, who keeps his flock in view, rescues them from the mists and the darkness, gathering them, looking for the lost, bringing back the stray, bandaging the wounded, making the weak strong.

He was also the ‘servant of God’ described by Saint Paul in the Second Reading who shows “great fortitude in times of suffering”.  We know Archbishop Oliver had to flee for his life and hide away many times – he experienced great dangers, hunger and imprisonment – but he was patient in all his trials, “prepared for honour or disgrace”.

My hope is that when people feel their faith is being tested or growing weak, they will visit Saint Oliver’s shrine here in the Cathedral and find strength and healing.  I want people to come here to experience God’s love and closeness when life is getting them down, and they are losing hope – whether it be in their relationships or in their chosen vocation.  I invite people to visit Saint Oliver’s shrine when they are afraid of what lies ahead for them, or when they are concerned about the direction which their family members are taking in life.  May all who come here look up at the statue of Saint Oliver and gain serenity, courage, wisdom and hope for themselves and for others.  Remember, on the day of Saint Oliver’s canonisation, Pope Paul VI said: “The message of Oliver Plunkett offers a hope that is greater than the present life; it shows a love that is stronger than death”.

Saint Oliver experienced that hope and ‘greater love’  by imitating Jesus our Saviour, who willingly gave his life on the hill of Calvary for the forgiveness of sins.  All over the world today, people are living their lives inspired by that same hope and ‘greater love’ that only Christ can bring.  In some parts of the world, our brothers and sisters in Christ are finding strength to endure suffering, or even death, for their faith – the news in recent months from Sri Lanka and Burkina Faso reminds us that persecution and martyrdom are not something from the past, but are a cruel reality today for many of our fellow Christians, of all traditions and denominations.

Jesus said to His disciples: “If the world hates you, remember that it hated me before you”.  It is said Christians  nowadays are not only being persecuted because of ‘hatred of the faith’ (odium Fidei), but also because of ‘hatred of love’ (odium amoris) – because they are standing up in the name of Christ for peace, reconciliation and justice and in defence of the poor.  Christians are being punished for witnessing to human rights and dignity; they are condemned in some places for reaching out to the exploited, to refugees and migrants, to travellers and to those on the margins of society; they are being insulted and ridiculed for speaking up for the lives of the most vulnerable and innocent, including the lives of unborn children.

My prayer tonight is that we will never forget Saint Oliver Plunkett, and all of the ‘martyrs of yesterday, today and tomorrow’, and that we will hear more strongly in our own hearts the personal call to holiness and to witness that is given to every Christian.  I hope that this new shrine to Saint Oliver in the Cathedral will help inspire all of us to accept our own daily crosses and sacrifices, and encourage us to be stronger in our faith, firmer in our hope and more active in our charity.  In that way, like Saint Oliver Plunkett, we too shall be transformed more fully, day-by-day, into the likeness of Christ.