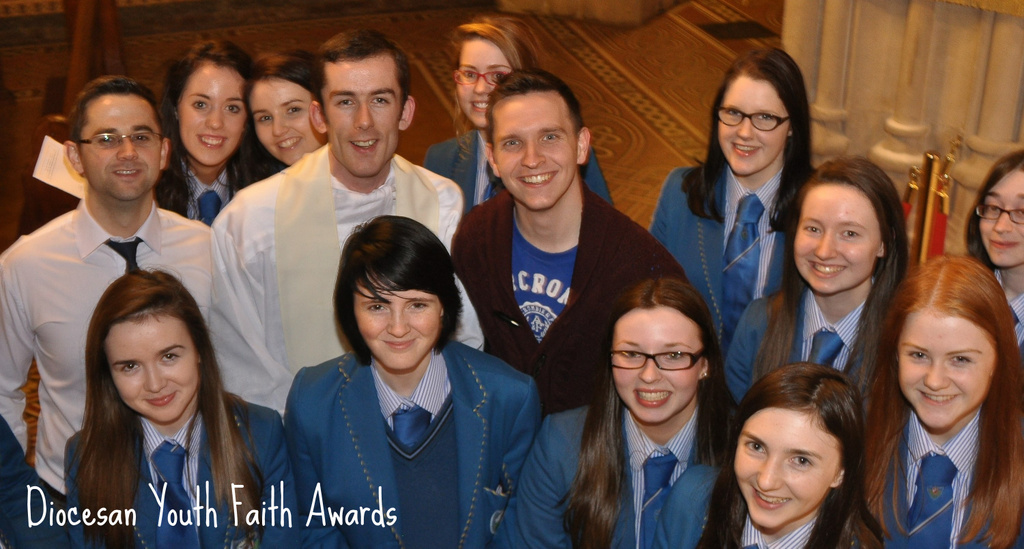 On Monday 15th April 2013, hundreds of people both young and old flocked to St. Patrick’s Cathedral Armagh for the Diocesan Faith Award Ceremony. This event was set up in order to celebrate the gifts and talents of over 300 young people who were there to collect awards for their role in their respective parishes, communities and schools. Representatives from all over the Diocese collected the awards, namely the Muiredach Cross Award and the Pope John Paul II Award in an event that has been described as “a fitting celebration for the work of young people in the Diocese.”

The evening began with a member of the awards committee reading a reflection as different symbols of our faith were brought forward.  This was a very moving part of the ceremony where we focused our attention to our faith.  The different symbols reminded us that our faith was precious to us.  We are children of faith, born of faith, and into faith.  It was that faith that we celebrated.  We were reminded that  we are a gift from God, that we are the future of our Church, and we will shine your light in the world, and  be a source of inspiration to all who meet you, on your own path to Jesus.

Click here to read the reflection read by Colette.

The Muiredach Cross Award and the Pope John Paul II Award are prestigious awards in the area of faith development and to receive one is undoubtedly a thing of great honour for those who were being celebrated at this event. The Muiredach Cross Award is particularly aimed at the younger members of society throughout the schools in the Diocese. It is hoped that participation in this award will provide a solid foundation upon which to build in later life when a young person is eligible for the Pope John Paul II Award. There is great interest in participation in these two awards and this was highlighted by the sheer enthusiasm shown in attendance at the event last Monday night.

The positive thing about these awards was that it wasn’t a passive experience for those involved. The pupils and their schools were actively involved throughout the whole ceremony, providing music and displaying the talents that are being put to such good use within their local communities. This event wasn’t only about recognising the achievements of the participants, but also to give them another platform to showcase their skills.

The event continued with a guest speaker, Gilbert Rice who gave a testimony of his faith. Gilbert is a young man from the parish of Armagh who has recently qualified as a doctor. He has been involved in youth ministry in Ireland and especially with the ADYC over the last six years. After speaking to Armagh Diocesan Youth Director, Dermot Kelly, he said; ‘we invited Gilbert as our guest speaker, firstly because he is young and because he epitomises what we at the ADYC are all about – which is providing opportunities for young people to come together, to explore their faith whilst supporting each other on this life long journey,

The event continued with great, inspiring and lively music from 40 Degrees, a youth ministry band from neighbouring Diocese of Clogher. Two young people then spoke of their own experiences of faith and the projects that they had completed in their communities. To hear the testimony of two young people about the value of the awards and what they mean to them individually was powerful to see and gave meaning to what the celebration. To see people empowered by faith is always something positive; to see it in such large numbers within one diocese, even more so.

Following the speakers all award participants were presented with their rewards for the work that they undertook. Cardinal Seán Brady and Dean Colum Curry presented the awards and there was a sense of achievement and enthusiasm in the air.

The evening concluded with more uplifting music and singing by the various schools and groups present at the ceremony. The Diocesan Youth Commission would like to thank those involved in the ceremony: leaders, parents and all who took part in what was clearly a successful and gratifying occasion.