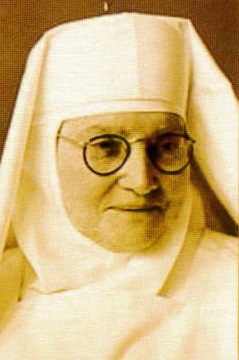 On 6 November 2016 the Cause for the Beatification of Mother Kevin Kearney OSF was officially accepted by the Congregation for the Causes of Saints and she was declared a ‘Servant of God’.

Mother Kevin has a strong connection with the Archdiocese of Armagh. She founded the Religious Order, the Franciscan Missionary Sisters for Africa, whose mother house is located in Mount Oliver, Dundalk, Co Louth.

Teresa Kearney (Mother Kevin) was born in 1875 in Arklow, Co Wicklow. At the age of 18 she moved to England. She entered the Convent of the Franciscan Sisters in London and took the name Mary Kevin when she took her final vows in 1898.

Mother Kevin was particularly interested in missionary work and spent most of her religious ministry in Uganda. Mother Kevin’s charity was outstanding; she embraced all walks of life without discrimination against colour, ethnic background, religion or political orientation. In spite of personal hardship, suffering and illness, Mother Kevin was instrumental in establishing schools, hospitals, orphanages and teacher training colleges in Africa.

In 1923 she founded the Little Sisters of St Francis which is now a fully-fledged religious congregation of over 800 members with convents in Uganda, Kenya, Tanzania and America.

To accommodate the increasing number of postulants from Ireland, Mother Kevin established a new convent at Mount Oliver, Dundalk, and in 1952 became the first Superior General of a new Congregation, The Franciscan Missionary Sisters for Africa. Mount Oliver is now a nursing home for sick and retired sisters.

Mother Kevin died in 1957. Initially her body was flown home to Ireland for burial at Mount Oliver. After entreaties from the Ugandan people, her mortal remains were returned to Uganda, and Nkikonjeru became her final resting place.

The Franciscan Missionary Sisters for Africa are keen to spread the news about the virtue, zeal and holiness of Mother Kevin. They would like people to pray for the success of the ongoing process. Favours or miracles attributed to Mother Kevin, need to be reported. Please promote the following Intercessory Prayer for the Cause of Mother Kevin:

Lord of the harvest,
you blessed so abundantly the labours of your servant Mother Mary Kevin,
in her service of love for the establishment of your Kingdom in Africa.

During her lifetime,
she showed love and mercy to all those in need.
Grant that through her intercession we may receive the favour we now ask:

We make this prayer through Jesus Christ Our Lord.
Amen