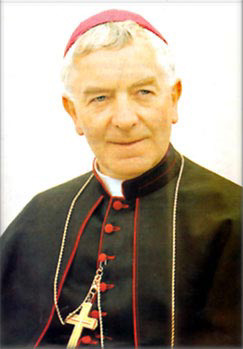 On 27 February 2013 Bishop Clifford announced that Pope Benedict XVI had granted his request for retirement as auxiliary bishop of the Archdiocese of Armagh on the grounds of my ill health.

The chequered pattern of the shield serves to remind us of the two principal Christian traditions found in Ireland. The hoped-for reconciliation of those traditions finds expression in Bishop Clifford’s motto, Ut Unum Sint (That they may be One).The scallop shell motif is abstracted from the old shield of arms of the Mulholland family, the maternal forebears of the Bishop; this family is traditionally reputed to have been the guardians of the bell of St Patrick, a theme commemorated by the symbol of a bell on the Bishop’s personal shield.