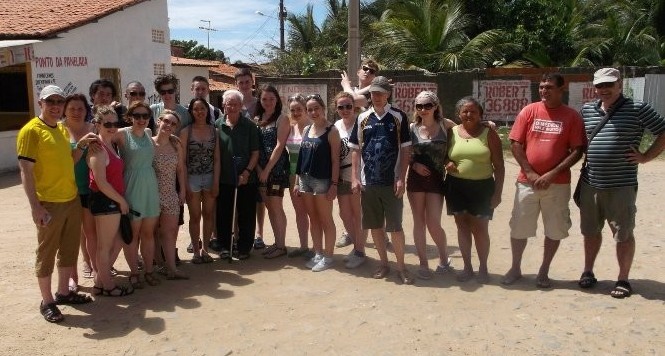 On Tuesday 9th July, 18 young people (10 from  Belfast & 8  from North Louth) along with two adult leaders and myself as Chaplain set out for Brazil with a dual purpose – to take part in a building project with ‘Serve : Solidarity in Action’  ( a Redemptorist Organisation) and to participate in World Youth Day in Rio de Janeiro. We arrived in Fortaleza (N.E. Brazil) on Wednesday 10th July and travelled by coach (10 hours!) to Parnaiba. The building project was outside Parnaiba. Following a yearlong fund raising campaign, the group raised enough to build 12 houses. We worked with local builders. Every day we started our work with prayer. The local people were very welcoming and hospitable. Some of our team also managed to visit a school, a crèche as well as a local dumping ground were some local people gathered bottles and pieces of metal that they could sell for a few ‘real’.

Apart from the work, we also took time out for a boat trip around a nearby delta, visited magnificent sand dunes, played football with a Brazilian team and met representatives from the local city council. One of the highlights was meeting the families who would live in the newly built houses. We left Parnaiba on 23rd July and after another long bus journey and flight, we were back in Rio for World Youth Day. Here we stayed with host families and took part in Catechesis. As there was such a large crowd in the city most of our journeys were on packed buses. However, the joy of meeting so many people from all over the world transcended any discomfort we may have felt. We walked for miles stopping only for international group photographs or to keep the team together. The main destination was Copacabana Beach and the atmosphere was spectacular. What an honour it was to be among 3.5 million people and seeing Pope Francis for the first time. WYD was highly organised with special meal and transport tickets for pilgrims. We were all very tired but elated when it came to flying home on Thursday 1st August and back to Dundalk in the early hours of Saturday 3rd August. The photographs you see with this article are a small sample of the memories that all of the pilgrims will carry in their hearts forever…I know I certainly will!       Fr Gerry

We thank all who made it possible for us to travel through fundraising as well as prayer support.