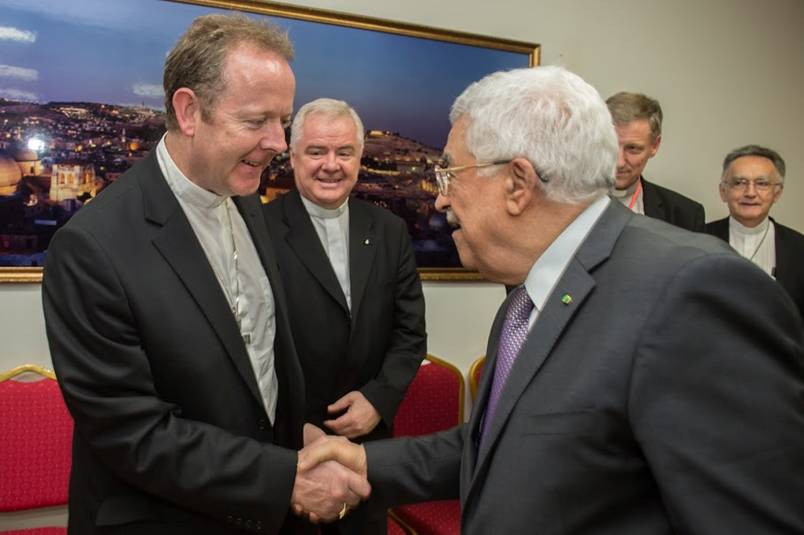 “We encourage the faithful in our countries to keep the Christian people of the Holy Land in their prayers and also support them through charitable outreach from parishes as pilgrims to the Holy Places. Pilgrimages are visible and concrete ways of showing solidarity and harmony with the Christian people of the land in which Jesus himself lived” – Cardinal Vincent Nichols and Archbishop Eamon Martin

Cardinal Vincent Nichols and Archbishop Eamon Martin, presidents of the Bishops’ Conferences of England & Wales, and of Ireland, have called for solidarity with, and prayer for the Christian communities who live in the Holy Land.  The Cardinal and Archbishop were returning from the Plenary Assembly of the Council of European Episcopal Conferences (CCEE) which had been meeting in Galilee and Jerusalem at the invitation of His Beatitude Fouad Twal, Latin Patriarch of Jerusalem.

The European bishops visited the Christian communities in Nazareth, Mil’ya (a town near the Israeli-Lebanese border) and Bethlehem, to hear first-hand the experiences, joys and sufferings of Christian families living there.  They also met with Palestinian President Mahmoud Abbas (see picture below) and Israeli President Dr Reuven Rivlin.

Cardinal Nichols and Archbishop Martin said they were deeply moved by their encounters with Christians in both Israel and Palestine and they both undertook to bring back to their faithful in England, Wales and Ireland the heartfelt wishes of Christians in the Holy Land to live in peace with a sustained hope for safety and a realistic long- term future for their families and children.

They said: “We came as pilgrims to some of the most sacred places for Christianity. We wanted to express our closeness and concern for the communities who live there and to pray with them and for them.  We were met by Christian communities who have a deep love and attachment to the homes and towns in which they and their ancestors have been living for many centuries.  The Christian qualities of charity, hospitality, faith and hope shone out on the faces of the people, young and old.  They yearn for peace and the stability of knowing that their property and livelihoods will be protected.  In Nazareth and Mil’ya we were overwhelmed by the youthful dynamism of their faith which was evident in their prayers and singing. In Beit-Jala, at the Bethlehem Arab Society for Rehabilitation, which specialises in care for disabled people, we witnessed first-hand the healing outreach of Christian people who seek to build bridges through health and education.  However at times we also sensed the isolation that Christian communities are experiencing – their fear of being neglected or even forgotten by their brothers and sisters in other parts of the world. We heard accounts of so many families who have already left because of fear or lack of confidence in a prosperous future for their children and grandchildren.

“Among the causes of concern we heard is the situation of the Christian schools in Israel which are facing a real crisis. At Nazareth young people, teachers, parents and pastors spoke to us of their struggle to keep their Christian schools open because of being faced with impossible cuts to the state grant. They have been ‘on strike’ since 1 September and the children have not been having any lessons. The sustainability of their schools is critical to the well-being, identity and confidence of these Christian communities. We communicated these concerns to President Rivlin when we met him.  We also heard from the Latin Patriarch about the widespread dismay and exasperation at the continuing construction of the wall in the Cremisan Valley on the border between Israel and the West Bank. Fifty-eight Christian families will be separated from their lands and their means of livelihood.

“It is important for all of us in Ireland, England and Wales to be fully aware and supportive of our brothers and sisters who live with such fear and uncertainty.  We also have to recognise the threats faced by the State of Israel and the fear that is constantly in the minds of its people. The Christian communities, which were the special focus of our visit, are a tremendous resource for the future of the Holy Land.  Their communities are vibrant, their schools are among the top-performing in the area.

“Both President Abbas and President Rivlin expressed their appreciation for the initiative and closeness of Pope Francis in their efforts to build peace.  We were heartened to hear them both speak to us of their desires for peace. We hope that they will redouble their efforts to find a solution to the problems in the region that fully respects the right of all its peoples, Jewish, Christian and Muslim, to live together in peace.

President of the Catholic Bishops’ Conference of England and Wales

Archbishop of Armagh and Primate of All Ireland

President of the Irish Episcopal Conference