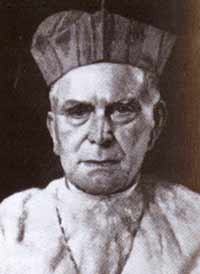 Born in March 1861 in Ballygawley, Co. Tyrone, in the Archdiocese of Armagh, Joseph MacRory studied at St Patrick’s College, Armagh and St Patrick’s College, Maynooth. He was ordained a priest in 1885 and undertook post-graduate studies in Maynooth in 1884-86. He served on the staff of Alton Seminary, Birmingham, as Professor of Moral Theology and Sacred Scripture in 1886-87. He became the first president of St Patrick’s Boys’ Academy, Dungannon in 1887 where he served until 1889 when he became a member of the staff of St Patrick’s College, Maynooth. He served on the staff of Maynooth in 1889-1915 during which time he held the chair of Sacred Scripture and Oriental Languages (1889), chair of Hermeneutics and New Testament Exegesis (1905) and Vice-President (1912). He was appointed Bishop of Down & Connor on 9 August, 1915, and ordained Bishop on 14 November, 1915. He was appointed Archbishop of Armagh and Primate of All Ireland on 22 June 1928. He was named a cardinal on 12 December, 1929, and assigned the titular church of San Giovanni a Porta Latina. He died on 13 October 1945 and was buried in St Patrick’s Cemetery, Armagh. His episcopal motto was Fortis in Fide (Strong in Faith).

Throughout his long episcopate both in Down and Connor and in Armagh, he was foremost in promoting the ‘Cause’ of Beatification of Oliver Plunkett, the martyred Archbishop of Armagh. He was also devoted to the work of the foreign missions.