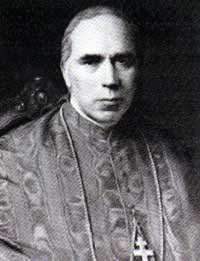 Born on 1 October, 1840, in Carrigart, Co. Donegal, Michael Logue studied in St Patrick’s College, Maynooth. Although not yet ordained a priest he was appointed in 1866 by the Irish Hierarchy to the chairs of theology and Belles Lettres in the Irish College, Paris. He was ordained a priest in December 1866 in Paris and remained on the staff of the Irish College, Paris, until 1874. He was administrator in Letterkenny in his native Raphoe Diocese from 1874-76. He then joined the staff of St Patrick’s College Maynooth, 1876-79, where he held the chairs of Dogmatic Theology and Irish and the post of Dean. He was appointed Bishop of Raphoe on 13 May 1879 and ordained Bishop on 20 July 1879. He was named coadjutor Archbishop of Armagh with right of succession on 19 April 1887 and he succeeded to the Primacy on 3 December 1887. He was named Cardinal on 16 January, 1893 and given the Church of St Mary of Peace, Rome, on 19 January, 1893. He died on 19 November, 1924 in Ara Coeli, Armagh, and was buried in St Patrick’s Cemetery, Armagh. His episcopal motto was In Patientia Salus (Patience is a Virtue).

The completion, through his energy in raising over £50,000, of St Patrick’s Cathedral, Armagh, and its dedication on 24 July, 1904, was perhaps the crowning event of his primacy. He was an advocate of Home Rule and opposed to the partition of Ireland; however, he did favour the Treaty of 1921. In 1923 he and the Northern Bishops felt obliged to issue a statement on the treatment of the Catholic community by the Stormont administration.