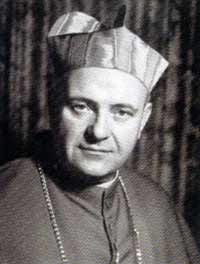 Born on 22 January, 1913 on the Falls Road, Belfast, William Conway studied at St Mary’s Christian Brothers’ School, Belfast, St Malachy’s College, Belfast, Queen’s University Belfast and St Patrick’s College, Maynooth. He was ordained a priest on 20 June, 1937 for the Diocese of Down and Connor. He spent the next four years doing post-graduate studies obtaining a Doctorate in Divinity in 1938 in Maynooth and a Doctorate in Canon Law at the Gregorian University, Rome in 1941. He served on the staff of St Malachy’s College, Belfast, 1941-42 teaching Latin and English. He taught in St. Patrick’s College, Maynooth 1942-58 as professor of Moral Theology and Canon Law. He was elected in 1947 dean of the faculty of Canon Law and Vice-President in 1957. He was named as Auxiliary Bishop to Cardinal D’Alton in 1958 and received Episcopal ordination on July 27, 1958. He was named Archbishop of Armagh on 9 September, 1963 and installed on 25 September. He was created a Cardinal on 22 February, 1965. He died on 17 April 1977 and was buried in the grounds of St Patrick’s Cathedral, Armagh. His episcopal motto was Praedicare Evangelium (To Preach the Gospel).

Cardinal Conway was Archbishop during the start of the ‘troubles’ and during some of the most horrific periods of the Northern Ireland conflict. He was strongly opposed to violence in all its forms. He said at Drogheda in July 1971 that “Violence can make the road to justice much longer and leave it strewn with innocent lives”. He pleaded with those who inflicted violence or injustice on their fellow men and women and repeatedly pointed out the incompatibility of this with Christian living. His compassion for those who suffer was not confined to the North of Ireland – the founding of Trócaire on his initiative, an agency to help the poor of the Third World is one of his lasting monuments.