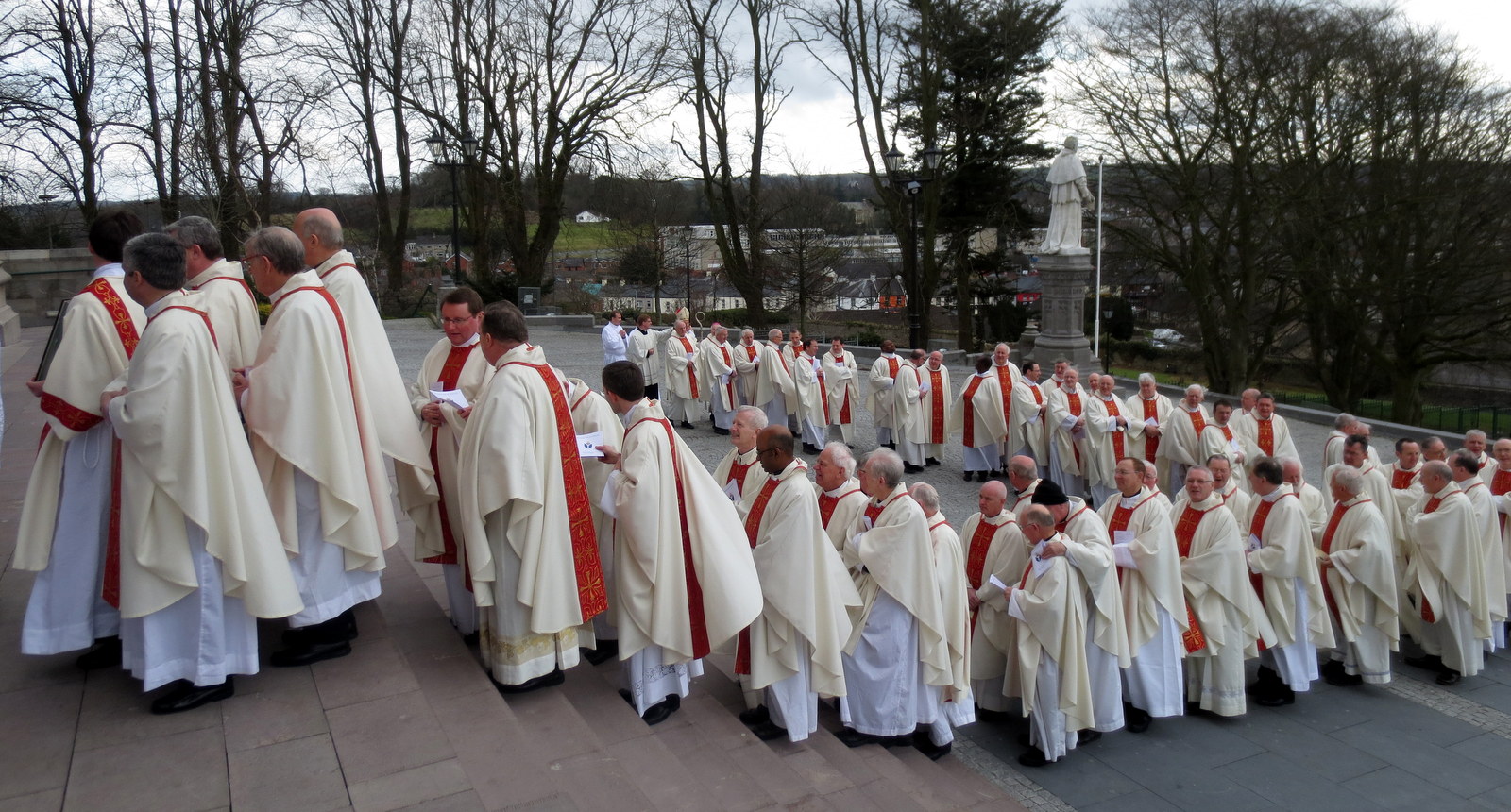 Today – Holy Thursday – as we give thanks for our lives as priests – I would like to share with you something of the events of the last few weeks. First of all three remarkable events:

Since his election Pope Francis has given permission for what he said in the General Congregation to be published where he made four points:

The Church exists to evangelise – to preach Jesus. Anything else is Narcissism – self serving and self-centred.

That sent a lot of people scurrying off to see what this man from Buenos Aires had been up to. A study of their Pastoral Plan reveals again four basic points:

Finally, one journalist has dug out the homily preached by Cardinal Bergoglio in Buenos Aires last year. He began by reminding his listeners that, as priests, we share in the same Mission – the same task entrusted by God the Father to his son Jesus and I say: ‘Please let us never forget that, especially in our moments of discouragement and despair’.

On this day, Holy Thursday, we come together to renew our commitment to that Mission. In other words, we renew our determination to devote ourselves to play our part in proclaiming the Good News – by word and deed – not only to the ends of the earth but to the margins of the society in which we live. Not only to those we like but to those who disagree with us and bother us. And today, we gather with priests all over the world to ask the Holy Spirit to rekindle the fire of love in our hearts – for only the fire of love will give us the courage and the energy to go where the Spirit is asking us to go right now.

That fire was first lit on the day of our Confirmation when we were called to bear witness to Christ. It continued to burn brightly enough in our hearts to help us decide to give our lives to Christ as priests. That same Spirit today hovers over the head of every priest in the world – the same Spirit that hovered over the head of Jesus in the Jordan. The Spirit says to each one of us ‘You too are my beloved son. Thank you for all you have done – continue to be my witness, I need you’. Think of the 5 billion who still do not know that I am the One and Only Saviour of the World. Do not doubt, for one moment, that we have the Message of Eternal Life but what is more, we now have the technology to send that message over the Iron Curtains and stone walls into the hearts that are hungry and thirsting to receive it.

The texts of today’s Mass invites us to follow the example of Christ and preach the truth – To do good to all, and to gladden the hearts of all who listen’.

What truth? You may ask.

Last year the now Pope Francis made the point that the truth that shone out most brightly in the parables of Jesus is the truth about the mercy of God. A God who reveals himself as a Father who never stops hoping that his son – no matter how prodigal he has been – will, one day come to his senses and come home. We are to preach the truth at all times with the compassionate heart of the Good Shepherd – ready to leave the 99 to find the lost and carry it home on our shoulders.

This is a topic dear to the heart of Pope Francis. It is in his motto and his advice to Confessors to always be patient and merciful. I beg and implore you, dear Fathers, to preach this message all through Easter-time begging people to come to confession and enjoy the fruits of Christ’s victory over sin.

Last year Cardinal Bergoglio urged his priests to think about the lovely images used by the Prophet Isaiah to announce the Year of the Lord’s mercy. Basically, it is a question of consoling all those who mourn – who mourn some loss in their lives –

The challenge that faces us pastors is to give them a crown to replace the ashes of grief – to substitute the mourning robe with the oil of gladness and to change despondency and despair into a hymn of praise. It is a tall order but not an impossible one.

For the gladness and the consolation we bring to others must first be present in our own hearts. When there is gladness in the heart of a priest it is, according to Pope Francis a sign that his actions are inspired by the Holy Spirit. When there is gladness in the heart of the people it is a sign that they too are intimately linked to that same Holy Spirit. The Spirit who sends us out is a Spirit of Consolation – not the Spirit of Indifference.

Pope Pau VI once said: ‘The modern world will only listen to teachers who are also witnesses. Lo and behold, Pope Francis has recently raised the bar a notch or two higher. He says: ‘The modern world will not listen even to Good News from sad and tired preachers, preachers who are anxious and impatient. They will listen to those whose lives radiate the fervour they have within them”. In other words, they will listen to those who themselves have witnessed the gladness of Christ. It is not enough that our sermon be orthodox or our pastoral work be well managed for, without the gladness of hearts, truth becomes cold – like that of many fundamentalists. Words taste like ashes if they do not contain the glorious sweetness of the truth of Christ – a truth that lights up everything with its glory.

I wish you all, and your people, gladness in abundance this Easter – gladness that comes from contemplation and adoration of our crucified and Risen Christ. For love of us he was led, like a lamb, to the slaughter but God raised him to the glory of Eternal life. May our celebrations of these three days draw us all nearer to the attainment of that glory