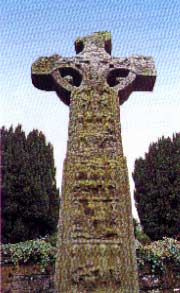 The High Cross of Donaghmore now stands outside the churchyard wall in the village street. It is recorded that the cross formerly stood within the Abbey grounds, where, during the religious conflicts of the late 17th Century, it was pulled down and seriously damaged. In 1776 the fragments were removed and set up on the present site.

The monument consists of a two-tiered base on which is an incomplete length of shaft, surmounted in turn by a portion of shaft with an open ring cross-head. The head is much injured, the two upper ring arcs are gone, the top of the shaft broken and the cap missing.