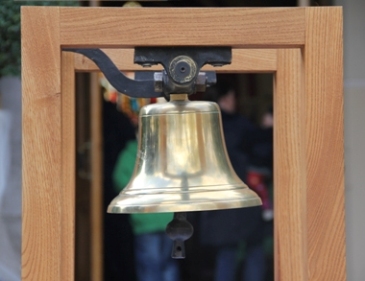 Details:
Following the St Patrick’s Day Mass in St Mary’s Pro Cathedral, Dublin, Archbishop Diarmuid Martin will bless the Eucharistic Congress Bell. He will also bless the first of four icons which have been prepared for use with the Congress Bell. The bell will then depart Dublin for Armagh.

The bell will move on from Armagh to the other pastoral areas in the archdiocese. The bell will be in the Archdiocese of Armagh for a total of 15 days. From Armagh it will move onto the Dioceses of Dromore, Down and Connor and Derry and onto the remaining dioceses. It will also be taken to the World Youth Day event in Madrid in July and will be taken to Lourdes as part of the Annual Dublin Diocesan pilgrimage. The first stage of the bell pilgrimage will be completed on 29 Jan 2012.

The full travel itinerary for the Eucharistic Congress Bell is available at the following link: http://www.iec2012.ie/bell

The Congress Bell has its origins in the Dominican Convent in Portstewart in Co Derry. It was used most recently to ring in the Jubilee Year 2000 in Glendalough, Co. Wicklow. Starting on St Patrick’s Day, the bell will be brought on foot from diocese to diocese by teams of volunteers.

The bell, a reminder of the tradition of St. Patrick’s Bell, will represent the call to faith, to prayer, to conversion and the vocation to service and to mission.

The bell has been fitted into a carrying frame in which it will be brought on foot from place to place around Ireland by teams of volunteers. It is hoped that it will be a focal point for gathering and for prayer, in cathedrals, parish churches and places of pilgrimage between now and June 2012.
In our preparation of the Eucharistic Congress, we have been asking people to think of it as a journey rather than just an event. Some of those who came to the last Congress in Dublin in 1932 have spoken to us of their mammoth journeys on foot or on bicycles. For this Congress we are asking people to engage in an interior journey of renewal. That is where the symbolism of the bell comes in. The bell will go on its journey around the country, but it will invite all those who hear it to begin an interior journey of renewal.
The Congress Icons
A series of four icons have been written and these will be displayed on the specially designed plinth for the bell. The icons are as follows:
Icon 1: Our Lady of Refuge – written by Philip Brennan, based in Belfast [to be blessed by Archbishop Martin]
Icon 2: Pantocrator – written by Richard Sinclair from Derry [to be blessed by Cardinal Brady]
Icon 3: Elijah and the Raven – written by Colette Clark from Dublin
Icon 4: Pentecost – also written by Colette Clark from Dublin

The remaining two icons will be blessed and attached at a later stage
Eucharistic Congress history
The first International Eucharistic Congress, held in France in 1881, gathered 300 people at the head of Eucharistic movements in European countries. During the following 125 years, the format of Congresses strongly evolved and they now attract some 12,000 to 15,000 participants for a full week of celebrations, adoration, catechesis, cultural events, fraternal gatherings, and commitments to aid the poor. Ireland last hosted the International Eucharistic Congress in 1932.
Brief history of Church bells:
While the public use of bells, in various forms, dates back to The Middle Ages, the first recorded use of church bells is thought to be attributed to Paulinus, the bishop of Nola in Campania, Italy, around the time of 5th century. Historical writings document the appearance of church bells throughout Europe over the course of the next several centuries.

Some of the oldest church bells still in existence are located in Europe, including the Bell of St. Patrick in Ireland. The earliest examples tend to be square, constructed of hammered iron plates, riveted together. Early church bells were much smaller than bells cast in more recent years. For example, a bell made for the church at Orleans, France in the 11th century was considered large at a weight of 2600 lbs. By the late 19th century, much larger church bells were being commissioned, such as the fifteen ton bell cast for St Francis de Sales in Cincinnati, Ohio.

The impact of church bells throughout history extends from their community and religious use to the influence they have had on church architecture. Some of the most beautiful and awesome towers in the world were constructed to house church bells
The most common use for church bells historically was for calling the faithful to worship. For example, bells are rung to mark the times for the Angelus. Also, bells have historically been rung to mark particular times during the weekly or daily services, most commonly before a service or mass, marking a funeral or wedding, marking times of prayer.