“Utter brilliance.” “Eye Opening.” “Challenging” “Encouraging and enlightening.” Some of the words used by our pilgrims to describe ADYC’s recent summer pilgrimage to Fatima.

Describing my experience with ADYC would be a similar chose of words and the reasons I got more involved.

As a second year, liberal arts religion student at St Marys Teacher training college Belfast, this year I had the opportunity to spend my placement period with ADYC. Here I got to see the organising, promoting, recruiting and work that goes into youth pilgrimages.

I had never been to Fatima before but it was one of the most enjoyable pilgrimages I have been on. It was peaceful, no rushing about, everything was calm and nearby. Added to that we had a great group of 24 young pilgrims.

Previously I had been to Lourdes; which I loved, so I knew Fatima would give me a similar experience. In hindsight, I must say the two are different. Not in the sense of holiness but the different fulfilling feeling I took from them.  By this I mean, I went to Lourdes in 2014 and I would this was the beginning of understanding my faith. It gave me that feeling of, I’d love to do more things like this. The following year I went to Rome, another great city but again different. In 2016; I had the first opportunity to go World Youth Day. Standing in Krakow with millions of other young people made me realise how amazing it is being part of the church.

Fast forward to July 2018 and I have sent six days in Fatima, again a whole new feeling. I would say that’s because Fatima is a city of its own, it offers a different experience to that of Lourdes or Rome or Krakow. Even the candlelight procession was a different experience. On one of the nights two of our leaders were fortunate enough to partake in the international procession. After talking with the pilgrims, I could sense that the pilgrims could relate to the candlelight procession. Some described the procession as “tranquil, peaceful and inspiring.” We had some pilgrims who had been to Lourdes before who felt, due to the smaller numbers they felt more “connected to the procession.” Is that not what we want? We want young people to feel associated with the church and more thoughtful in prayer.

That to me is the beauty of Fatima that you can feel connected with the events because it has only been 101 years since the visitations. The fact that we could visit Rua do Adro the parish church of Fatima, where the three shepherd children had been baptised, made communion and confirmed. We were also able to visit their house and met one of their nieces has that sense of connectivity.

While we were in Fatima we visited enclosed Dominican nuns. This gave me personally, a time to think about how much they were giving up. I suppose living in such a secular society and having such a busy life it makes you realise sometimes you need to take a step back from everything to realise how caught up you can get and lose focus on the main things in life.

The first couple of evenings we watched the candlelight procession from the sanctuary area.

The nights we didn’t partake in the candlelight procession, we would have sat in the sanctuary area in our own group and prayed the rosary, with reflective thoughts between each mystery. This is an example of how we can take a step back and take time to think about the things in life we do not spend enough time on or lose focus.

That’s what the pilgrims seemed to do, they took the time to think more about their faith and some even came to me and asked questions about things that seemed to be a barrier in their faith.

I guess that is another reason I wanted to go to Fatima. Sometime I feel I can get too caught up in work, study or other aspects of life, a week of prayer and reflection helped my spiritual being.

Fatima has made me realise how I got involved with ADYC. Opportunities like these, that I was given, that ADYC offers to young people in the Armagh Diocese, empower and enrich the young person’s faith. 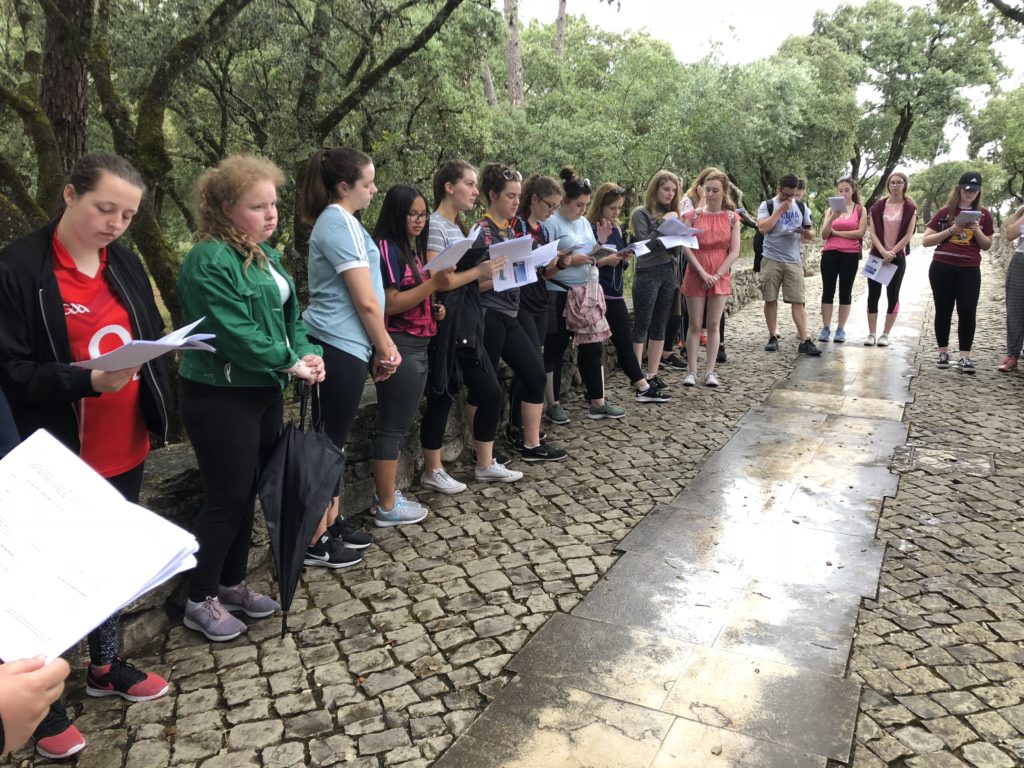