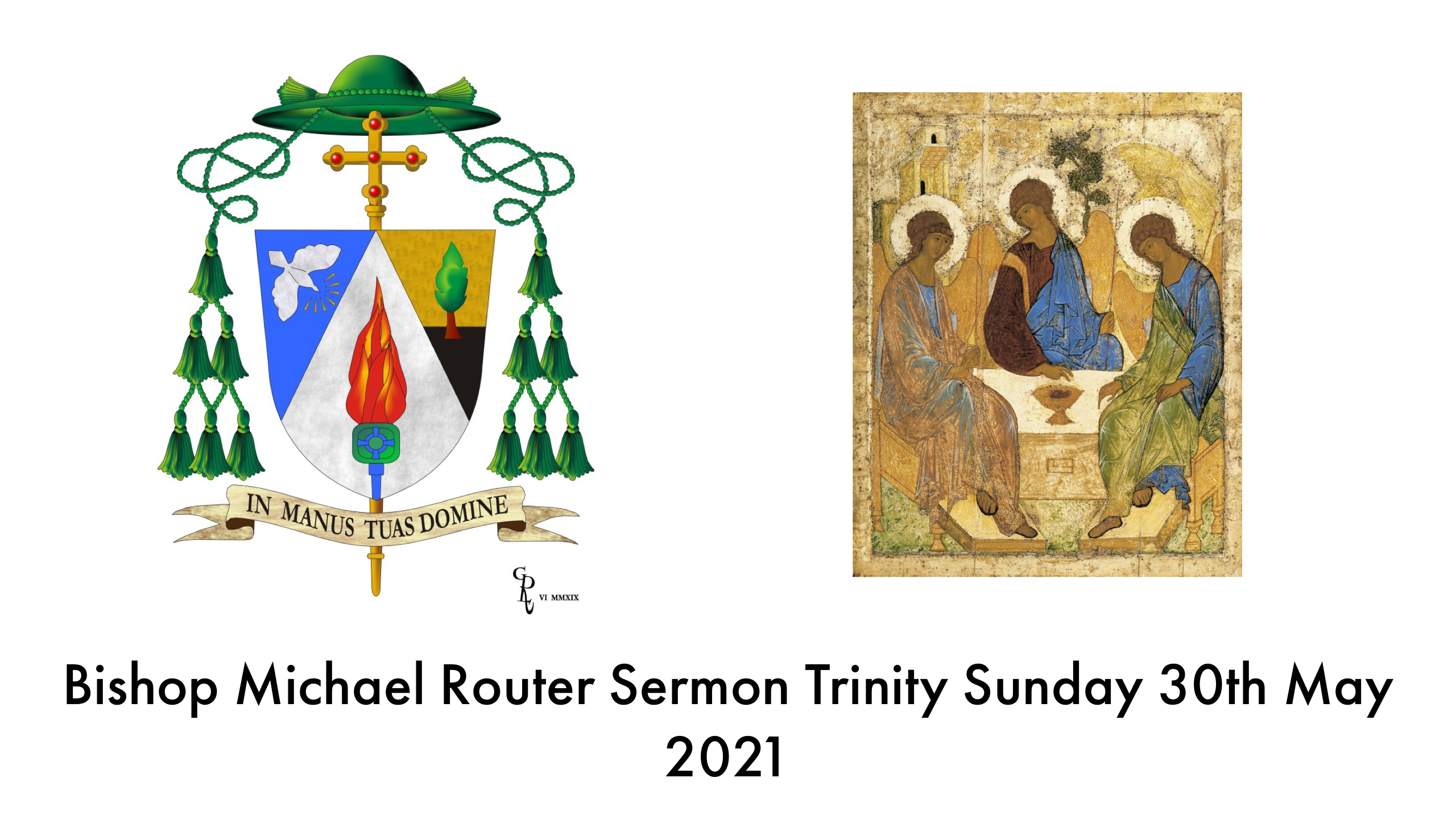 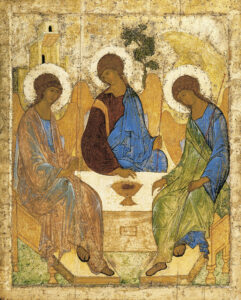 Depicting the Trinity in an artistic form has been one of the great challenges for artists down through the centuries. God the Father is typically unseen, God the Holy Spirit stretches the symbols that represent him, and God the Son is more than just a man. It is difficult to capture in words the essence of three persons in one God, but it is equally difficult in imagery. One of my favourite depictions of the Trinity is by Andre Rublev, a Russian Orthodox monk who was born in the 14th Century. His icon is an interpretation of the episode from the book of Genesis where three men visit Abraham and Sarah and promise that they will give birth to a son. It is obvious, however, from the symbolism and positioning of the three men that Rublev was actually depicting the Trinity. The three are sitting around a table, dressed similarly and each carrying a staff representing their equality. There is, however, a display of deference to the figure on the left as both the figure in the centre and on the right bow slightly towards him indicating that he is the Father, the creator.

While the three men clearly form a circle, it is not a circle that is closed in on itself or one which excludes others, rather it is a circle of relationship and intimacy which opens and offers space for others to join and participate. When you as the spectator view the icon, you are invited in to be part of this intimate relationship and take your place in the family of God.

The icon tells us much about God, as revealed to us in Jesus Christ, that words in themselves certainly struggle to reveal. The God that Jesus Christ revealed is not a solitary or remote God. Jesus revealed that he is the Son of the Father and that after his return to the Father he would send us the Holy Spirit who would guide and support us in his family, the Church. As Saint Oscar Romero said in his sermon for the feast of the most Holy Trinity in 1979, “this is truly a great revelation. God is not a solitary being; God is three, God is family, God is communion”.He tells us that it is only when we see the God revealed to us in Jesus Christ reflected in and illuminating everything around us that “we understand that God has created a world out of love to give it to his children, with whom he wants to enter into the communion of family”.

Therefore, family is at the heart and centre of the perfect relationship of love that God reveals to us. It is modelled for us as well in the relationship of Jesus, Mary and Joseph, the Holy Family of Nazareth. The relationship between Joseph and Mary and between Jesus and his parents contributed to his formation and to the person he came to be. The appreciation and understanding of the vocations that Mary and Joseph had received were truly lived humanly by them, yet they gave themselves wholeheartedly to the task in the belief that something extraordinary and special was happening. It says so much to us of the important role that parents have in helping to bring to fruition God’s plan for the world.

As he hung on the cross, Jesus instructed John, the beloved disciple, to be Mary’s son and His mother to be John’s mother. In that way he was assigning Mary a mother’s role in all our lives. It is little wonder then that Mary is beloved by Catholics all over the world and that she in turn has such a close and deep relationship with us, a relationship that becomes especially tangible in places like Knock.

In this ‘Year of St. Joseph’ we also reflect with a new urgency on his role as the foster father of Jesus. We ponder on what he teaches us about the role of the father as protector, guide, and carer. This special year invites us to learn from Joseph’s quiet service born out of love and self-sacrifice. He was led in a relationship of trust with God to devote himself to Mary and Jesus.

One of the most remarkable features of the apparition here at Knock is that the Holy Family were all present. Jesus, as the Lamb of God, is present on the altar of sacrifice and Joseph stands to the left of Mary. The apparition at Knock involves not just the appearance of a solitary figure but a gathering of persons significant in our faith. The apparition was not to one person but to a large group of people, young and old, who were at the heart of this small community of Knock. The symbolism involved in what happened here, and the context in which it happened, reenforces the communal identity of the Church as a family of families. In addition, the specific family we emerge from, and the wider Christian family to which we belong, find their source and inspiration in the Trinity, and have a wider significance for the well-being and stability of society.

We live, however, in a world where human weakness and frailty erode the Christian ideal of human relationships that is placed before us. We strive, but inevitably fail, to live up to the ideal of relationship that is based on love, humility, and self-sacrifice. The Church itself, the family of God, is also very conscious, that it has sadly failed in its responsibility to provide safe shelter for or to protect its own members. Instead of reflecting the love that is at the heart of the Trinity, it has sometimes failed to live up to the values it stands for and professes.

We are all too aware that many people here in Ireland and abroad, have suffered sexual and physical abuse at the hands of clergy and religious. For too long they suffered in isolation, without being heard, acknowledged, or helped. Over the past twenty-five years, however, the Church has, through the organisation ‘Towards Healing’ that it funds, and its forerunner ‘Faoiseamh’, provided a counselling service that almost 7,000 people have availed of, survivors of institutional, clerical, and religious abuse and members of their families. The service has a network of counsellors in Ireland and abroad which it engages to provide essential therapy to those who have suffered such abuse. It is a free service available to survivors and one that is based on the values of compassion, empowerment, and hope. The compassion comes from a humble recognition of the trauma and suffering experienced by survivors and how it permeates all areas of their lives. ‘Towards Healing’ provides support that endeavours to empower survivors to reclaim and rebuild their lives. It gives them hope that they will find healing and develop the resilience to live their fullest possible lives.

Ultimately, every good family strives to provide such compassion, empowerment, and hope to its members. Such a family is a reflection of the work of the Trinity in our everyday lives. It is the essence of what Jesus, Mary and Joseph modelled for us in their family and it is our purpose as the family called Church. As a Church we have sometimes lost touch with what we are about and have ignored the inspiration of the Holy Spirit. When that happens, we can neglect to display the compassion that should be the kernel of how we operate. A Church without compassion only hurts and alienates people and robs them of confidence and hope.

So today, on this feast day, in this sacred place, loved by so many Irish people, let us pray for the Church in Ireland. As it embarks on its Synodal Pathway may it move closer to the image of our Trinitarian God and model the dialogue, openness and love that will help to heal the wounds of the past and move us forward together in hope.

Father, Son and Holy Spirit, lead and guide us.

Our Lady of Knock, Queen of Ireland, pray for us.