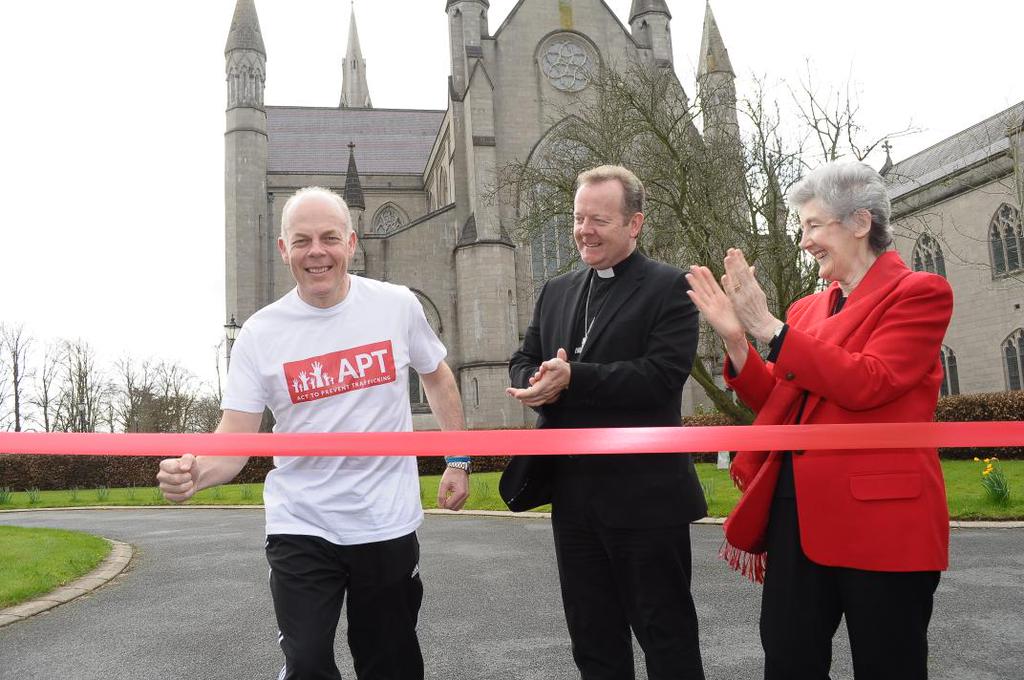 Earlier this year, Archbishop Eamon Martin proposed that a resolution for 2015, might be to raise awareness and do what we can to tackle the global scandal of human trafficking. The Archbishop proposed that we might ask questions of ourselves and our public representatives: where is trafficking happening in this country? What are we doing to make Ireland the land of one thousand welcomes and a cold place for human traffickers? Clearly trafficking is a problem to be addressed both nationally and internationally. It begins, however, with personal and public awareness of what trafficking is, and how it can be prevented.

In his message for New Year’s Day – the World Day of Peace – Pope Francis places before us the cruel facts of modern day slavery: that millions of children, women and men throughout the world are deprived of their freedom and forced to live in conditions akin to slavery. He spoke with bluntness about the greed and corruption which preys upon the dignity of our fellow human beings who are ‘trafficked’ from place to place and mistreated as objects for exploitation and prostitution. Many of them, because of extreme poverty and helplessness get caught up into a vicious circle, accepting roles and situations that are beneath their human dignity. And sadly, because of selfishness and global indifference, we can easily remain blind and ignorant of their plight – perhaps even tacitly complicit.

Fr. Gerry Campbell Parish Priest of Kilkerley, Dundalk in an effort to create awareness of the scourge of modern day trafficking will undertake a diocesan run – from the Bann to the Boyne on April 26th, 27th, 28th & 29th. Fr. Gerry a native of Magherafelt, Co Derry is no stranger to running the length of the Archdiocese of Armagh. His first diocesan walk/run was in 2013 when a team of runners and walkers joined him at various parts of the Archdiocese to support him in raising funds for ISPCC. Last year he ran the same route in support of the Trócaire Lenten Campaign.

This year he will commence his run in Newbridge, Co Derry on Sunday 26th of April when he will run from St. Trea’s Church Newbridge to Dungannon, Co. Tyrone. On Monday his run will begin from St. Patrick’s Church Dungannon and end in Newtownhamilton, Co. Armagh. On Tuesday he will run from St. Michael’s Church, Newtownhamilton to Kilsaran (Castlebellingham) Co. Louth and finally complete the run on Wednesday by running from St. Mary’s Church, Kilsaran to St. Peter’s Drogheda. As on other years Fr. Gerry is hoping he will be joined by supporters along the route. Each run begins with a prayer service at 8.30am (Dungannon 9.30am) and the run begins at 9.00am.

This year Fr. Gerry is running in support of APT (Act to Prevent Trafficking). Apt is a faith-based group working to end the trafficking of humans for sexual exploitation. The members of APT belong to religious congregations or missionary societies that are part of the Conference of Religious of Ireland (CORI) and/or the Irish Missionary Union (IMU).

An estimated 21 million people are trafficked globally, and Ireland has been identified as a source, transit, and destination country for human trafficking which is a modern form of slavery.

Approximately 80% of the victims in Ireland are trafficked into the sex industry. Human trafficking is increasingly lucrative, comparable to the illegal arms and drugs trades as one of the most profitable criminal activities in the world.

The purpose of APT is twofold; firstly to raise awareness of the issue of sex trafficking; and to work in collaboration with others for the prevention of the trafficking of women and children for sexual exploitation.

Pope Francis has called human trafficking a scourge and an open wound in contemporary society. APT is committed to healing this wound; to working towards a society free from slavery, in which the inherent dignity of each individual is respected and protected.

If you wish to make a donation to APT please check out their website   www.aptireland.org (cheques payable to ‘Cori Anti-Trafficking Group’) or you can email Fr. Gerry directly for further information [email protected]

We wish Fr. Gerry every success on this year’s run.