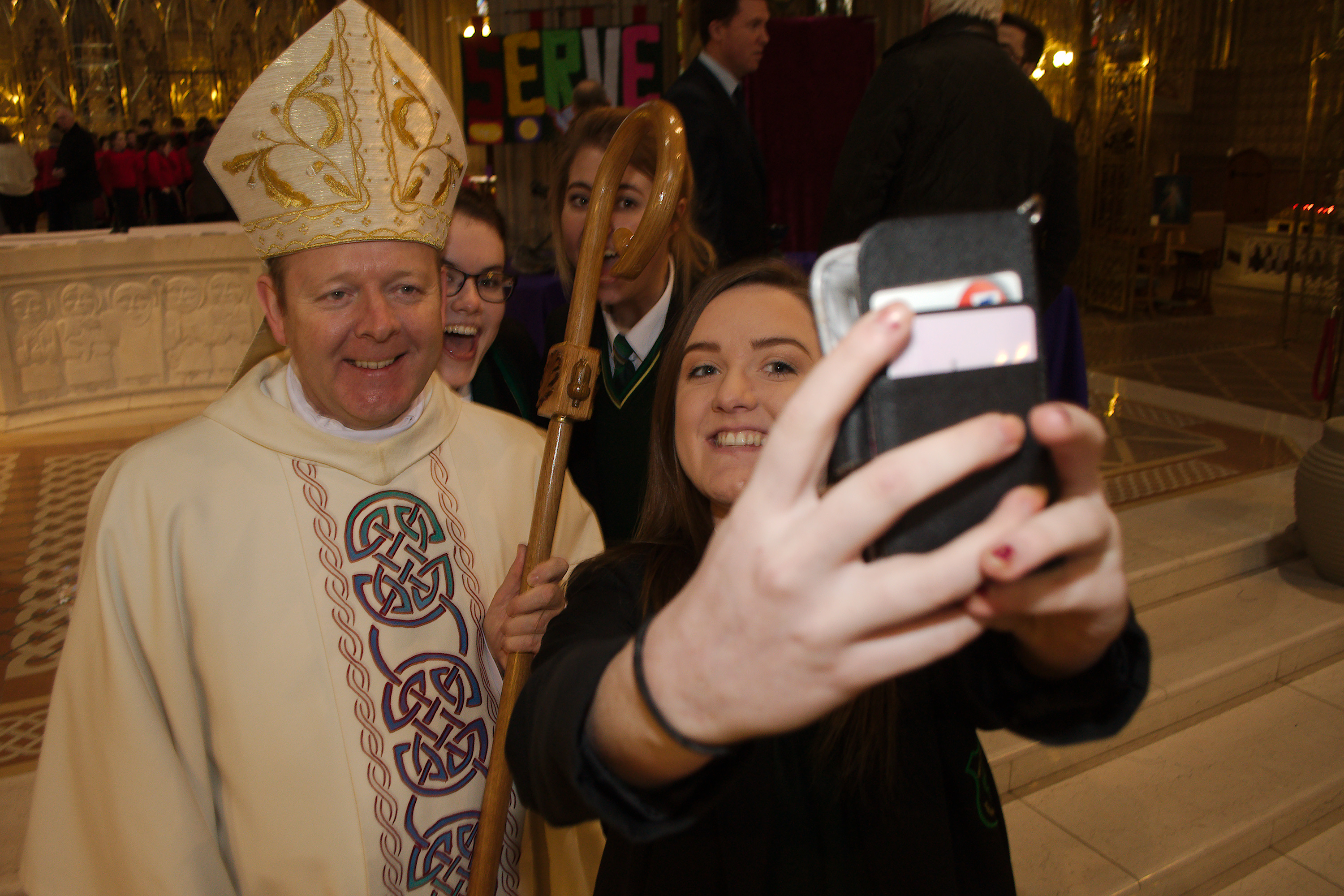 On Wednesday morning last we had a wonderful celebration in the Cathedral to prepare for Catholic Schools Week. With pupils and staff from schools all over the Archdiocese of Armagh we reflected on this year’s theme – ‘Catholic Schools: Called to Serve’. We have 184 Catholic primary and post primary schools catering for thousands of children and young people in the four counties of our diocese: Armagh, Derry, Louth and Tyrone. Since coming to the Archdiocese, I have been hugely impressed by our schools. I want to pay tribute today to our young people and to the tremendous commitment and dedication of staff, parents and governors who work so hard to help our young people become the best they can be, and to give them an education rooted in the values of the Gospel.

At our Mass on Wednesday, to bring out the theme that Catholic Schools are ‘Called to Serve’, girls from Saint Catherine’s College mimed the Gospel Reading about Jesus washing the feet of His disciples at the Last Supper. Jesus humbled Himself to do the job of the lowliest servant in the household, and wash the dirty feet of the guests.  As He did so, He taught them: ‘I am giving you an example. If I, your Lord and master, wash your feet, then surely you must wash each other’s feet’. It was a message that He had taught them often: ‘I did not come to be served, but to serve’. And it was a lesson that He vividly lived out when He humbled Himself still further the next day by accepting death on the Cross.

As the girls from Saint Catherine’s mimed that moving Gospel story, I couldn’t help thinking about the wonderful service given by our Catholic schools. Today we are giving thanks for 44 years of dedicated service by Saint Brigid’s High School to the education of boys from this city and beyond. Saint Brigid’s was founded in 1971, at a tough and troubled time. But despite the struggles and difficulties that many of the pupils and their families were going through, Saint Brigid’s endeavoured to give all its boys a good start in life, in many cases rebuilding their self-esteem, encouraging them to ‘try their best’, ‘feabhas a chur ar’ as the school motto puts it. Down the years Saint Brigid’s has steadfastly remained caring and attentive to the needs of its pupils.  I salute the service of its five principal teachers and all the support staff and teaching staff – some of whom are sadly no longer with us. I thank God for their selfless service.  I want to acknowledge the parents who have supported Saint Brigid’s and the many members of the parish and community who have served as members of the Board of Governors. I thank the officials of CCMS and SELB for their guidance, the chaplains, the sports coaches and many specialist staff and mentors who have helped the boys develop their full potential.

I recall a happy visit I made to Saint Brigid’s last spring.  It is a tribute to the staff and principal that I sensed a school which had found a good balance and equilibrium between the languages of head, heart and hands; where boys feel both cared for and challenged. As one person out it to me: ‘We try to wrap the boys in a mantle of love and care, as Saint Brigid would want us to’.

Although today’s Mass is one of celebration and thanksgiving for all that has been achieved in Saint Brigid’s, it is of course tinged with sadness, knowing that its chapter in the long history of education in Armagh is coming to an end. The decision to transition Saint Brigid’s to Saint Patrick’s Grammar School has been a difficult, but courageous one, which aims to offer boys in Armagh and its hinterland the very best curriculum opportunities possible. I would be pleased if Father Kevin Donaghey and the Board of Governors of Saint Patrick’s would consider commissioning somewhere in the College, a fitting and lasting memorial to Saint Brigid’s High School, as a tribute to the contribution it has made to education in Armagh.

I am pleased that the new arrangement means that academic selection will no longer be used as an entrance criterion for schools in the city of Armagh. More than forty years ago the Trustees of the Sacred Heart Sisters took the courageous and pioneering decision to end academic selection for girls in Armagh. Saint Catherine’s has certainly demonstrated that young people do not need a selective school system order to achieve their full potential.

Now that the schools in Armagh City have moved away from the use of academic selection, this means that 24 of the 27 post primary schools in the Archdiocese do not select pupils for admission by ability.   I would like to work closely with the Boards of Governors of the three remaining grammar schools in the Archdiocese to encourage and help them find a way of ending academic selection in the near future. In this day and age no young person should be turned away from a Catholic school on the basis of their mark in an entrance test at the age of ten or eleven.  I am completely confident that these fantastic schools shall be able to continue their outstanding service to Catholic education without the use of academic selection.

Catholic schools are called to serve all pupils and especially the poor and most disadvantaged of society. We must always be on the lookout for those who are being left behind or neglected in any way in our Catholic education system.  The holy founders and foundresses of our Catholic schools were clearly inspired by a preferential option for the marginalised and poor. As Catholic schools, called to serve, we must always be alert to the inequalities in our educational system system where too many of our young people, particularly the socially disadvantaged, leave without meaningful qualifications or opportunities; where the responsibility for children from the most deprived backgrounds, minority ethnic communities or for those with the greatest educational needs seems to fall unevenly on the shoulders of only some of our post-primary schools. It is worrying that two thirds of young people in Northern Ireland from socially disadvantaged backgrounds are not getting 5 GCSEs at A*-C with English and Maths. Less than 20% of boys from socially disadvantaged background are achieving that standard. Too many of our young people are not making the transition to education, employment or training beyond the age of 16 and are ending up marginalised and often  forgotten by the system. These are problems that concern us all. These are problems to be shared and tackled by all of us. As Pope Francis says: ‘None of us can think we are exempt from concern for the poor and for social justice (EG. 201)’.

In celebrating and thanking God today for 44 years of service to young people by the school community in Saint Brigid’s, I am conscious that this was a school which undertook perhaps more than its fair share of responsibility for the marginalised. Now, in humble service, Saint Brigid’s gives way to a new educational future for boys in Armagh – as Archbishop Oscar Romero once put it, ‘we are prophets of a future not our own’. I hope and pray that the Saint Brigid’s ethos of caring, encouragement and challenge shall not be forgotten, but shall continue to influence Catholic education in this city and beyond for many years to come.