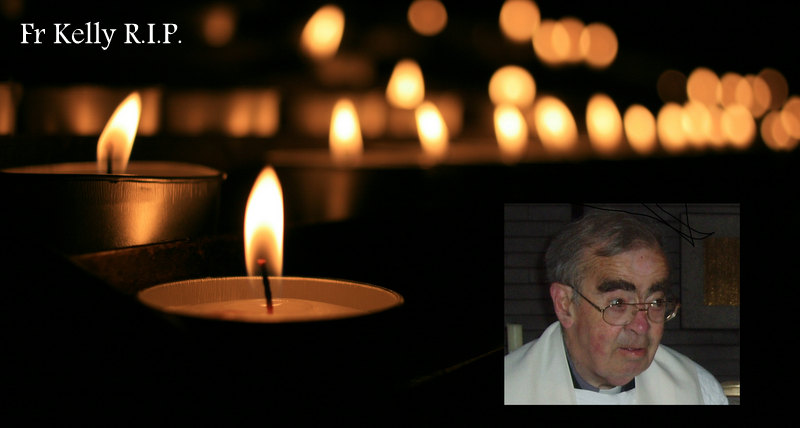 It is a fitting co-incidence that this beautiful story from the Gospel of Mark about the multiplication of the loaves and the feeding of the 5000 is read on the day of Fr Terence Kelly’s funeral – could there be any more appropriate Gospel for the Requiem Mass of a priest?

The story brings out the compassion of Jesus the High Priest, the Good Shepherd. Jesus responds to the hunger of his people – not just to the physical hunger which they were naturally experiencing at the end of a long day, but also to their spiritual hunger. They were searching for something and Jesus took pity on them because ‘they were like sheep without a shepherd’.

Jesus turned to his disciples for help. He said – ‘you give them something to eat yourselves’ – and they replied: Lord, what have we got to feed such a large crowd? And then the miracle happened. As soon as the disciples began to minister and distribute the little they had among the people, Jesus multiplied the effects of their contribution over and over again so that everyone got as much as they wanted. And there were basketfuls left over!

I have often reflected on that Gospel story as a kind of paradigm for priesthood – because priesthood is essentially a call to act in the community in the name and person of Jesus who is the Head and Shepherd of the Church. God’s people are still hungry – in many ways they remain like sheep without a shepherd, but God continues to have pity on them and he calls priests to walk among his people, to minister to them, to feed them. We priests may not think we have much to contribute – at times we might cry out: Lord, where are we going to get enough to feed all these people? But the miracle continues: God multiplies our flimsy efforts with his transforming grace – so that through us, especially through the Eucharist, the central moment of our day, God nourishes his hungry people.

Fr Terence Kelly was a faithful priest. He was actually one of eight young men from the Archdiocese of Armagh who went to study at Maynooth back in 1952. He served in seven parishes of the Archdiocese. After temporary placements at Dundalk, Ardee and Clonfeacle,  he became Curate in Loup for a couple of years before spending 22 years as curate in Dungannon parish.  Fr Terry’s first appointment as Parish Priest was in Tandragee at the end of the eighties, and then in 1994 he moved to Ballinderry where he ministered for 14 years as PP until his retirement in August 2008. Even after that he was happy to help out over in Ardboe- Moortown with his lifelong friend and classmate, Fr Vin Darragh. It was only a short while ago, he said to the sacristan after Mass in Ardboe – you know I don’t think I’ll be able to manage to say public Mass again: as the Book of Ecclesiastes puts it: ‘There’s time to be born, and a time to die’.

Almost 55 years of ministry!  I haven’t even got half that under my belt!  I can only stand back in admiration at Fr Terry’s dedication and express great gratitude to God from the people, priests and bishops of the Archdiocese for his tremendous generosity.

Fr Terry was ordained in 1959 before the start of the Second Vatican Council, and no doubt his early years as a priest must have been quite strange and challenging as so much changed in what he would have been used to as a seminarian. But somehow I get the sense that Fr Terry was a straightforward, faithful and committed priest with a sound foundation of prayer and practice set down in his family home and school in ‘The Grange’.

Over those 55 years he ministered through the darkest and most harrowing days of the troubles; he suffered generally from poor health and for medical reasons was unable to drive since October 1978; and he lived through very troublesome and shameful times for the Church. But he had three characteristics which I believe ‘anchored’ his priesthood in its solid foundations.

The first anchor for Fr Terry’s priesthood was his love for the Eucharist. His daily Mass provided him with sustenance and nourishment which in turn enabled him to feed the spiritual needs of his people. His love for the Eucharist was evident when celebrated his Golden Jubilee Mass back in 2009 and when he was presented with a beautiful chalice to mark the occasion, he chose to give it to this Church of St Colmcille in Knockaconey, the parish where he had made his first Holy Communion nearly seventy years previously. We are using that chalice for the celebration of his funeral Mass today. For Fr Terry, the Eucharist was a call to mission. You might think being unable to drive would be a handicap or an excuse even, but Fr Terry turned it into a pastoral advantage – he was always out walking, meeting people and through the kindness and support of many friends and parishioners giving him lifts everywhere, he was able to remain completely faithful to his priestly duties, including sick calls to the hospital and home visitation. That was how he earned the trust and confidence of his people – and even though I believe he could be quite sharp at times – underneath he was a deeply pastoral man with great compassion for his people.

The second anchor for Fr Terry’s priesthood was his devotion to Mary, the Mother of God. Perhaps it was his own indifferent health that naturally drew him to Mary, who stood at the foot of the Cross, but he loved going to Lourdes. He was a faithful pilgrim with the Archdiocese over many years. He became a good friend and pastor to the Lourdes helpers and he enjoyed mingling with the pilgrims down at the grotto. I’m told though that in his latter years he preferred to ‘hold court’ in the foyer of the hotel and watch all the goings on around him.

I think the third anchor for Fr Terry’s priesthood was his own dear family and their support for him. He was born near here in ‘The Grange’ on 30 August 1934 – and, in a way, he never left it. He loved to come home on a Sunday even after his parents and brothers Brian and James died, he developed a great affection for Patsy and his nieces and nephews – as they did for him. Fr Terry would go for walks and tell them stories and listen to them as they grew up. In return for his kindness and affection, his family were a great support to him as he became more dependant in recent years –as of course was Mary O’Neill, his faithful housekeeper. Fr Terry was also a caring mentor to many young priests who worked with him. His friends and family will miss him, with his stories and chat. He enjoyed a simple life with his family, friends, dogs and favourite TV programmes. I believe he was a great man for Sport – it’s not that common that someone could enjoy a great football game and still be a fan of the cricket. Although a faithful Armagh supporter – he cried tears of joy when Armagh beat Kerry – he had no problem following and encouraging his parish clubs – on one occasion he demanded premium seats at Croke Park as the Parish Priest of Ballinderry!

Last Easter when speaking to the priests in Rome, Pope Francis said a priest should be like a shepherd amongst his flock, getting to know ‘the smell of his sheep’. Well, I think that characterised Fr Terry’s priestly ministry, in among his people, getting to know them by name, knowing their joys, their struggles, and feeding their spiritual hunger for God – all the time in a hardworking, no-nonsense, unassuming way.

St Paul says to Timothy in today’s second reading: ‘I have fought the good fight to the end; I have run the good race. All there is to come now is the crown of righteousness reserved for me’. These are words which I trust that Fr Terry could use as he appears before the Good Shepherd to give an account of his life and his ministry as a priest. And I hope and pray that God the merciful judge shall call him forward and say ‘Well done good and faithful servant, come and inherit the kingdom prepared for you since the foundation of the world’.