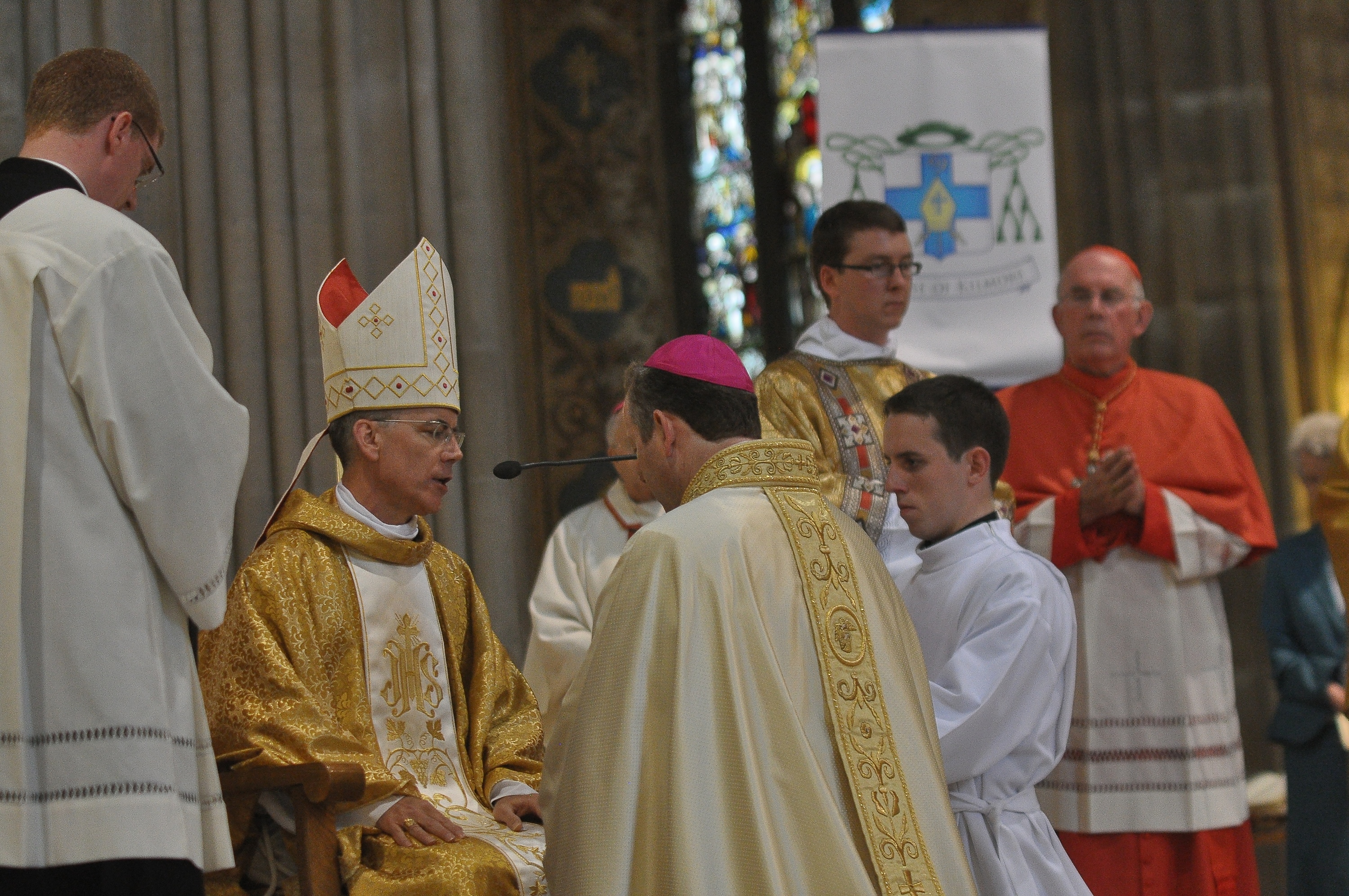 Please see below the text of Archbishop Eamon Martin’s homily which will be delivered this evening at Mass in Saint Patrick’s Cathedral, Armagh on the occasion of Archbishop Martin’s investiture with the pallium. The pallium symbolises the bond and union between an archbishop and the Pope. His Excellency Archbishop Charles Brown, Apostolic Nuncio to Ireland, will conduct the investiture which will take place in the presence of representatives of the nine dioceses of the ecclesiastical province, as well as priests and people from the diocese.

Just over five months ago on the 21st January, the feast of the young martyr Saint Agnes, two little lambs were carried in baskets up to Pope Francis for his blessing.  They were a gift from the Trappist monks of Tre Fontane in Rome to the Benedictine sisters of Saint Cecilia in Trastevere. The lambs had been specially chosen to provide their first wool for the pallium given to the new archbishops of the world by the Holy Father on Monday last.

The pallium is a simple white woollen stole decorated with crosses and edged in black so that when it drapes over the shoulders of the new archbishop it invokes the image of a lamb being carried fondly by its shepherd.  When Pope Francis blessed the pallium last Monday on the Feast of Saint Peter and Saint Paul, he reminded us that it is a symbol of the pastoral care which we, as bishops, are called to give in imitation of Christ, the Good Shepherd, who laid down His life for His sheep.

By calling us all to the Basilica of Saint Peter  for the blessing, the Holy Father was reminding us always to exercise our ministry as archbishops in unity with each other and in communion with the Pope and the Church in Rome.  Until the moment of blessing the pallia rested beneath the altar at the tomb of Saint Peter. I couldn’t help thinking of that line from the creed: I believe in one, holy, Catholic and apostolic Church.

This evening back home  in Armagh I recall my predecessor Saint Malachy who, nine hundred years ago, travelled twice to Rome to seek the pallium – at first for Armagh and then for Armagh and Cashel. As you know he was unsuccessful and he died on the journey at Clairvaux  in the arms of his beloved friend Saint Bernard.  But only a few years later, following the Synod of Kells, four pallia were indeed sent by the Pope to Ireland symbolising the recognition from the Holy See for the four new ecclesiastical provinces of Ireland: Armagh, Cashel, Dublin and Tuam.

Once more I am humbled at the honour that God has bestowed on me by calling me to serve Him in this way.  The pallium reminds me that God expects a lot from me, but He gives me all the grace I need to do His will, and to be prepared to sacrifice my own will and desires in order to follow His way. Pope Francis, in his homily on Monday, challenged us new archbishops to be masters of prayer, and of faith, and to be courageous witnesses in the world.  ‘No Christian community’, he said, ‘can go forward without being supported by persistent prayer’.  ‘Be ever faithful to the deposit of faith’, he went on, and be courageous witnesses, ‘who are not ashamed of the Name of Christ and of His Cross’.  I know that if I am to meet these challenges, if I am to be true to God’s calling in my life, then I must try to conquer my sinfulness and selfishness and instead to offer my life for my sheep.

To be honest, I sometimes feel daunted by this challenge.  On Wednesday in Rome I visited the catacombs where the early Christian martyrs were buried. On the way I had the privilege of celebrating Mass in the little Church of Domine Quo Vadis, where it is said Saint Peter, who was running away from the dangers of persecution in Rome, met Jesus going the other way into the city to be with his flock.  It was all the more poignant for me because it was the Feast of Saint Oliver Plunkett who I know was not afraid to die for his people and his beliefs.  In my room at the Irish College in Rome this week there was a striking painting of Saint Oliver Plunkett, Archbishop of Armagh, kneeling before the gallows just before his martyrdom.  In the painting his pallium lies discarded on the ground where his executioners have hurled it; in its place over his head and shoulders is wrapped the hangman’s noose.

I also read recently about Primate Edmund O’Reilly another great hero of the penal times (he was the archbishop who ordained the future Dean Bryan McGurk to the priesthood). Primate O’Reilly had to travel in secret around the country hiding in caves and in the woods. Apparently his pallium was once hidden for safekeeping in the hollow of a great oak tree, but it was stolen. When the archbishop got it back it was cut to pieces – we know all this because he wrote to ask His Holiness at the time if he could still use it, or should he seek another!

Please God my ministry will be less hazardous. But I can’t help thinking that all of us, as Catholics and Christians are entering a time when we will need the gift of courage to stay faithful to the teachings of the Gospel. We are living in the midst of a more insistently secular culture which expects conformity and compromise with the thinking of the day, and which sometimes tends to ridicule and even reject those who witness to timeless or absolute truths.

The world of today still yearns for the Good News of Jesus Christ. But we will need to find a language of faith and truth which can speak in fresh and powerful ways about the depth of the love of Christ to those who are finding life increasingly shallow or despairingly empty of meaning and purpose. We should not be altogether surprised if, like Jesus Himself, our message is completely rejected by some, even in our own country.  We will need the fortitude of the prophet Ezekiel who in this evening’s First Reading heard the Lord calling him to stand up and teach those who had turned against Him, whether they listen or not.  Likewise we will need the humility and endurance of St Paul in Corinth who, whilst being constantly aware of his own weaknesses, was able to withstand insults, hardships and persecutions for Christ’s sake, knowing that when he was weak, he was truly strong.

I am certain that I have no chance of being God’s brave witness without the support and warmth of your prayers, for I am weak and my need for your prayers is great.  I am so grateful for the power of prayer which has already sustained me until today.  Pope Francis asked me on Monday with the other archbishops to “Teach prayer by praying, to announce the faith by believing; to offer witness by living!” What gives me hope in responding to this challenge is the knowledge that you are supporting me by your prayers; you are strengthening me by your faith; you encourage  me by your witness every day.  And so, this evening I place my hope and trust in the efficacy of a beautiful prayer which the Holy Father himself prayed for me and the other new archbishops in Saint Peter’s on Monday. He prayed to God the eternal shepherd, that we may take up the yoke of the Gospel placed on our shoulders, and may we find it so light and easy that, as we guide others by our example and fidelity in the way of God’s commandments, we may one day merit a place in God’s eternal pastures.  Amen.