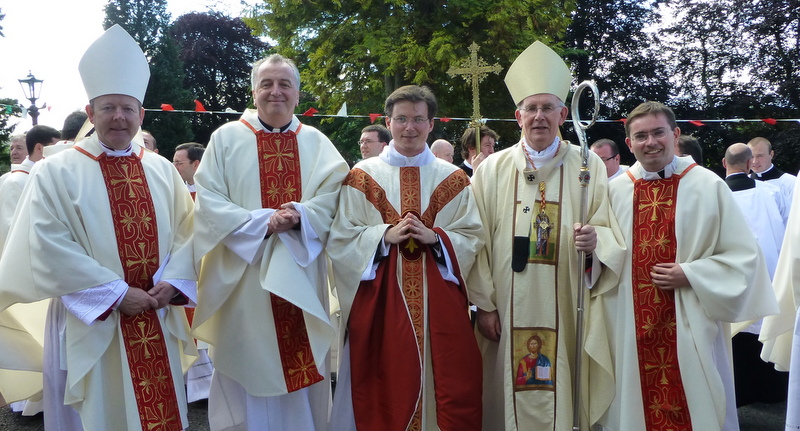 On the 21 September 1952, Georgio Mario Bergoglio – then seventeen years of age – now Pope Francis – had an extraordinary experience.  He came to realise, in a very vivid and powerful way, God’s amazing love for him.  As a result, he decided to join the Jesuits and become a priest.

We do not know.  We can only guess!  He was coming to the end of his time at Secondary School.  He was wondering what God wanted him to do with his life.  It was the Feast of St Matthew – one of the twelve apostles and author of the First Gospel. Matthew was a tax collector when Jesus called him – never a popular profession and certainly not in the time of Jesus where tax collectors were allowed to add on an extra bit for themselves and then hand the rest to the hated Roman government.  Nevertheless, Jesus saw his potential and chose Matthew.

The young Georgio Bergoglio may or may not have been aware, at that stage, of what the Venerable Bede – a famous Englishman had written about the call of Matthew. He certainly became aware of it later on, because, when he was made a bishop, he chose his motto from what Bede wrote – so let us hear it.

I believe that this idea of God looking at all of us in mercy and pity and choosing us to play our part in his plan is a powerful influence with Pope Francis.  On 13 March, when he was asked if he would accept his election as Pope, he said:  “I am a sinner.  I am well aware of that but I have confidence in the mercy of God and since you have elected me or rather God has chosen me, I accept”.

Created by God, out of love.

Our God is a God who continually comes – who continually invites.  At Baptism God invites those being baptised to share in the Priesthood of Jesus Christ.  It is a call to listen to His word and praise His name and play our part in building up God’s kingdom.  But there is yet another calling:  Jesus chose some of his followers – not all – to carry out – publicly – not in private – priestly work.

Jesus was sent by the Father.  He, in turn, sent the Apostles.  He sent them into the world to carry on his work.  The work of Jesus was that of teacher – teaching the most important subject of all – Knowledge of God.

It is a work of priest – offering prayers and praise, continuing His presence in our midst by celebrating sacraments.  It is the work of shepherd – leading, nurturing, guiding and healing God’s holy people, on the road to eternal glory.

Today that work is carried on in the Church and will continue – you can depend upon it – until the end of time.

Today is a day of great joy.  Paul Murphy – your son – your brother – your friend – is about to be ordained a priest.  That is a great calling.  No-one takes the honour to himself but only when he is invited by God to do so.

About seven years ago or more, the inspiration came to Paul that he was being chosen, by Christ, to be a Public Representative of Christ in, and for, the people of God.  Thankfully, Paul decided that he had better give serious consideration to that thought for he knew that if God had chosen him to do some good as a priest, then it would remain undone if he refused to follow that calling.

He also concluded that if he refused to follow God’s calling, he was unlikely to find fulfilment in some other calling.  Thankfully, he received the whole-hearted support of his family in all of this.  Today we give thanks to God and to his parents, family and friends for all of that support and indeed to everyone who helped, in any way, on Paul’s long journey of studying and travelling to Belfast and Rome and Maynooth and Drogheda.  Despite that wonderful support, some may still wonder how a young man like Paul Murphy can give up so much to follow Christ in the priesthood. The secret is that he does so in the sure knowledge that if he plays his part Christ most certainly will do his part.

I was at the Golden Jubilee of Father Tommy McNulty’s priestly ordination recently.  There was a lovely logo –

For all that has been – thanks.

For all that will be – yes

That ‘yes’ can be spoken with confidence because God has promised, through his Spirit in the Church, to sustain His ministers with His grace.  Of course, the Minister of Christ – the Representative of Christ – has to play his part by trying to become Christ-like in his own life.  That we do by uniting ourselves to Christ in our prayers and in our actions.  By uniting to Christ means making Christ more and more the centre of our lives.  It means handing over, more and more, of life to Him.

In a few minutes Paul will answer ‘yes, I do’ to questions which the Church puts to him at this stage. They are indications of his willingness to sacrifice his desire to be independent.  Day by day this big ‘yes, I do’ is lived out in a series of little ‘yeses’.  But this call to give, for the sake of others, can only be done without bitterness or self-pity if Christ is really at the centre of our lives.

As we prepare to move to the next stage can I ask your prayers for three intentions:

Click here to see photos from the Ordination day