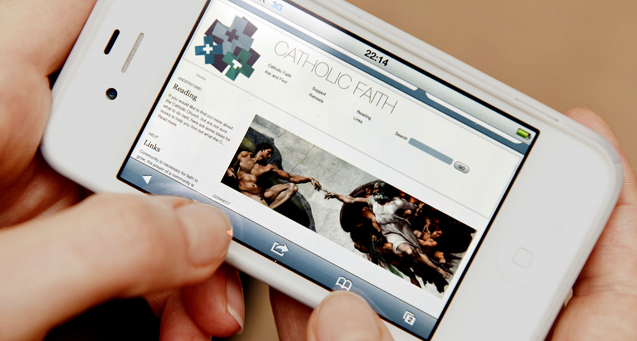 ‘The New media and the work of Evangelisation’

Many people say that it was a four minute speech which led to the election of Cardinal Jorge Bergoglio of Buenos Aires as Pope. In his pre-conclave speech to the other Cardinals, he used the popular image from the Book of Revelation of Jesus standing at the door and knocking. But in an unusual and inspired way he turned the image around:  “Obviously, the text refers to his knocking from the outside in order to enter but I think about the times in which Jesus knocks from within so that we will let him come out. The self-referential Church keeps Jesus Christ within herself and does not let him out….” A Church which does not come out of herself to evangelise, he said, becomes self-referential and then gets sick.

We have become familiar over the past year with this consistent theme in the teaching of Pope Francis. In Evangelii Gaudium he writes: ‘I prefer a Church which is bruised, hurting and dirty because it has been out on the streets, rather than a Church which is unhealthy from being confined and from clinging to its own security…. If something should rightly disturb us and trouble our consciences, it is the fact that so many of our brothers and sisters are living without the strength, light and consolation born of friendship with Jesus Christ, without a community of faith to support them, without meaning and a goal in life’.

It is in this context that I would like to introduce the challenges and opportunities for new media in evangelisation. I am going to take it for granted that all of us here accept the necessity of people of faith to be involved in new media if we want to make the Gospel widely known in today’s world. The Catholic Church has always advocated the use of whatever media are available to it in bringing the Gospel to the ends of the earth. Fifty years ago, at the Second Vatican Council, one of the first decrees issued by the Council fathers, Inter Mirifica, was on the media of social communications. Its first paragraph reads:

‘Among the wonderful technological discoveries which men of talent, especially in the present era, have made with God’s help, the Church welcomes and promotes with special interest those which have … uncovered new avenues of communicating… news, views and teachings of every sort. The most important of these inventions are media such as the press, movies, radio, television and the like. These can … reach and influence, not only individuals, but the very masses and the whole of human society…’

Note the welcoming and positive tone of the message for these ‘wonderful technological discoveries’. Mention of ‘press, movies, radio, TV’ seems miles away from smartphones, tablets, Netflix, Skype, Twitter and Facebook!

Christians always made use of all forms of media to spread the good news – whether it be parchments and scrolls, high crosses, art, stained glass, illuminated manuscripts, the printing, television or radio. We must welcome the use of so-called ‘new media’ in this task. Many parishes have websites, there are ‘sacred spaces’ on line, priests on Facebook, the pope on Twitter, i-Catholic, soul waves radio and many more. Last year Proposition 18 from the Synod on the New Evangelization stated, “Education in the wise and constructive use of social media is an important means to be utilized in the New Evangelization.”

By way of example, last week along with Cardinal Brady I led the Armagh diocesan pilgrimage to Lourdes. Our first morning Mass at the grotto was web-streamed across the world and within minutes we had requests for special intentions from home and beyond.

There are different ways of looking at the use of new media in evangelisation – one is to see the new media as yet another tool to reach people with the message of the Gospel. By means of the various forms of new media, we can reach out to the peripheries and draw people in, so that they can hear the Word of God and understand it better. They may then be open to a face to face encounter with a Church or parish group, or feel drawn to Mass and the sacraments.

Another way is to see the digital, online, or virtual world itself as a new space which is itself in need of evangelisation. It is in this context that we notice references to a ‘digital continent to be won for Christ’, a ‘digital sea in which the barque of Christ must set sail’, a ‘virtual world ripe for mission’.

One of my favourite chapters in the New Testament is Acts 17, which speaks about Paul going into Athens, the bustling communications capital of the ancient world. Paul is greatly distressed to see that the city was full of idols. Verse 21 comments: All the Athenians and the foreigners who lived there spent their time doing nothing but talking about and listening to the latest ideas’.  I see the internet as being like the ‘new Athens’, new marketplace or Areopagus, a ‘global village’ to be won for Christ. Our challenge is to become witnesses for Christ in this strange new world, to enter into dialogue with the digital culture.

If only to be able to reach our young people and an increasing percentage of people of all ages, we need to be present in this new Areopgaus. Our young people are spending huge proportions of their time in this virtual world, so much that for many it is becoming increasingly the place where they live their lives, and what we call the real world of face to face seems often dull uneventful to them, and their secondary existence. Never cease to be amazed at the ability of young people to text, snapchat, Facebook with others all while talking to you!

The internet has become like the nervous system of our culture, in which more and more people are expressing and exploring their identity, picking up and discarding their values and attitudes, expressing their feelings and prejudices, befriending and unfriending each other, measuring  each other’s status and importance, relevance and appearance. If our young people and people are living in this gigantic network, then we, as people of faith need to be in there, dialoguing with the inhabitants of this world, with the men and women who dwell in the web!

When in the Church we speak about new evangelisation, we more often than not think of the so called ‘real world’, but billions of people live in the social networks. These have been described as among the biggest countries in the world – and they are countries with no barriers. For example, 1.2 billion inhabit the world of Facebook. The majority of these people may never enter a Church, but if we are to respond to the Gospel mandate given us by Christ to ‘go out to the whole world’, then we must nowadays include the digital world and proclaim the Good News there. Our challenge as evangelisers has always been to reach out and encounter people where they are at, and nowadays, more and more that means online!

In his MESSAGE FOR THE 48TH WORLD COMMUNICATIONS DAY, Pope Francis speaks about ‘Communication at the Service of an Authentic Culture of Encounter’.

The internet, in particular, he says, ‘offers immense possibilities for encounter and solidarity.  This is something truly good, a gift from God’.

Pope Francis recognises the problems and drawbacks with authentic communication in the virtual world, for example – problems with achieving balance, fighting stereotypes, the ease with which people can isolate themselves or ‘barricade themselves’ online ‘behind sources of information which only confirm their own wishes and ideas, or political and economic interests’.

However he is clear that as Christians we need to ‘walk the streets of the digital highways, to encounter like the Good Samaritan those who are lying on the side of the road and witness to them in tenderness and love’. Thanks to the internet, he says, ‘Christian witness can reach the peripheries of human existence’. I quote from the Message: ‘The digital highway is … a street teeming with people who are often hurting, men and women looking for salvation or hope.  By means of the internet, the Christian message can reach “to the ends of the earth” (Acts 1:8)’.

There is a temptation to see evangelisation in the new media as simply bombarding people with religious messages. Pope Francis encourages us to go beyond this. He challenges us to think about how we can effectively encounter people and witness to them in, and using, new media. He asks: ‘Can we be available to them, hear their issues and problems, engage with their questions and doubts and their search for truth’?

In a beautiful passage he says: ‘May the image of the Good Samaritan who tended to the wounds of the injured man by pouring oil and wine over them be our inspiration.  Let our communication be a balm which relieves pain and a fine wine which gladdens hearts’.  He urges us: ‘Let us boldly become citizens of the digital world… in order to dialogue with people today and to help them encounter Christ.  [The Church] needs to be a Church at the side of others, capable of accompanying everyone along the way’.

I would therefore like to suggest a number of principles to guide our presence in the digital highways:

1. Be positive and joyful. Offer ‘digital smiles’ and have a sense of humour. Remember  that it is the ‘ joy of the Gospel’ that we are communicating, so, as Pope Francis says: no ‘funeral faces’ or ‘sourpusses’!

2. Strictly avoid aggression and ‘preachiness’ online; try not to be judgemental or polemical – goodness knows, there is enough of this online already! Instead, try Pope Francis’ approach of ‘tenderness and balm’.

4. Remember ‘Ubi caritas et amor’. Fill the internet with charity and love, always giving rather than taking. Continually seek to broaden and reframe discussions and seek to include a sense of charity and solidarity with the suffering in the world.

5. Have a broad back when criticisms and insults are made – when possible, gently correct.

7. Establish connections, relationships and build communion. Church has always been about ‘gathering’. In this, it is worth considering an ecumenical presence for the Christian churches online. The internet tends to be a place of ethical and intellectual relativism, and often of aggressive secularism. The scandal of disunity among Christians can be easily exploited and exaggerated. Therefore we must seek to share resources so that we can have a powerful Gospel witness. Wouldn’t it be wonderful if people started noticing online: ‘See how these Christians love one another’.

8. Educate our young to keep themselves safe and to use the internet responsibly.

9. Witness to human dignity at all times online. Seek, as Pope Benedict once said, to ‘give a soul to the internet’. We are well aware of the pervasive prevalence of pornography on the internet which can ‘pollute the spirit’, destroy and degrade human sexuality and relationships, reduce persons to objects for gratification, draw millions into the commodification and commercialisation of sex, feed the monster that is human trafficking.

10. Be missionary, be aware that with the help of the internet, a message has the potential to reach the ends of the earth in seconds. In this regard, let us foster and call forth charisms in younger committed people who understand the power and potential of the net to bear witness.

On 5 May Pope Francis tweeted: @Pontifex: What does “evangelise” mean? To give witness with joy and simplicity to what we are and what we believe in.

That is our challenge and our privilege as Christians. Freely we have received the joy of the gospel now let us freely give it.