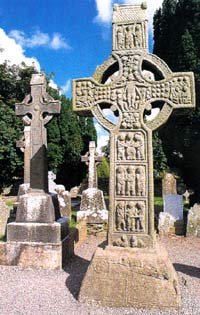 There are three High Crosses located in the churchyard, Monasterboice, Co. Louth. The best known of these is the South Cross or, as it is commonly called, Muiredach’s Cross, so described on account of the inscription which appears on one side of the shaft which reads: OR DO MUIREDACH LASNDERNAD IN CHROS (A prayer for Muiredach for whom the cross was made). The Muiredach referred to is believed to be Muiredach, son of Domhnall, a cleric of considerable importance and abbot of Monasterboice who died in 922. Consequently the monument is regarded as dating from the early tenth century.

The Cross stands about seventeen feet high and consists of a truncated pyramidal base from which rises a shaft surmounted by a large ring-head, on which the billet mouldings are not placed on the arcs of the ring, but on the rounded angles of the intersections of the arms on the shaft. The cross is finished by a roof-shaped cap; this is represented on each wide side of the shaft by panels of shingling topped by a massive roof-tree, while on the two narrow sides the heavy gables rise to form crescentic or horned finials decorated by pellets.