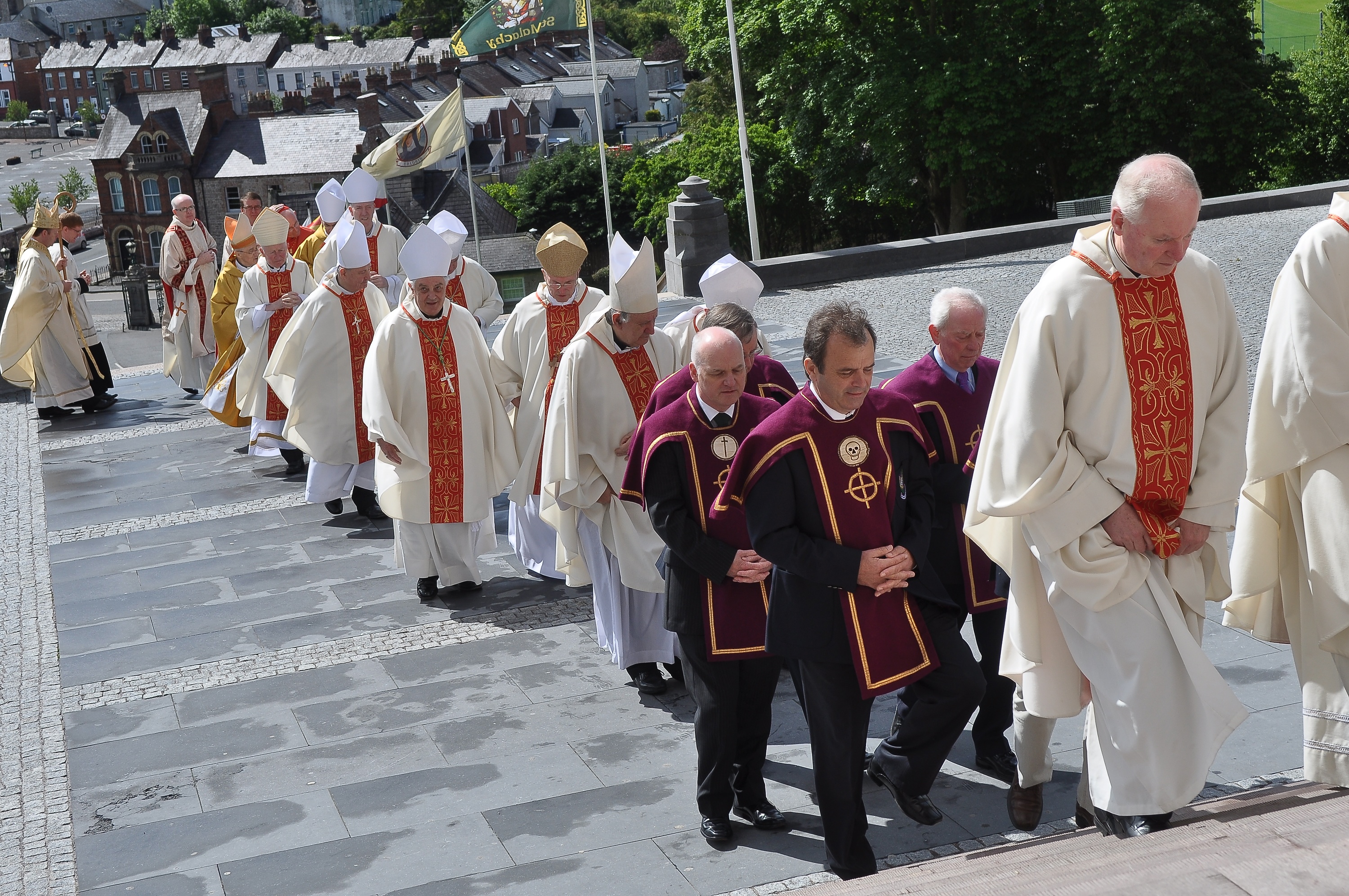 A National Mass of Thanksgiving to mark the 14th centenary of Saint Columbanus took place on Sunday 21 June in Saint Patrick’s Cathedral, Armagh. Archbishop Eamon Martin presided and Father Neil Collins preached the homily. Below are the opening remarks of Archbishop Eamon and the text of the homily from Father Collins:

Last November I had the honour of visiting Bobbio and San Colombano al Lambro in Northern Italy to mark the beginning of celebrations to mark the 14th centenary of the death of St Columbanus the great Irish misisonary saint.  And what a privilege it is for me to welcome all of you here today to Armagh for this National Mass of Thanksgiving.

A very special welcome to Cardinal Brady, to His Excellency Archbishop Charles Brown and to the visiting bishops, religious superiors and congregational leaders who are present.  To the Columban fathers and sisters, to the Knights of St Columbanus and other members of the Columban family as well as people, priests and religious from Armagh and other parts of the country, thank you for joining us today.  I greet the pilgrims from places associated with Columbanus in Ireland, including the groups from Cleenish and Bangor. To Archbishop Richard Clarke and our brothers and sisters from other Christian traditions, you are especially welcome here among us.

(Don Mario is a canon of this great Cathedral!)

Fourteen hundred years is a long time.  It is difficult for any of us to imagine what life was like even one hundred years ago.  But we can be certain that when Saint Columbanus set out to be a ‘pilgrim for Christ’ he was literally surrendering his future, his whole life, into the hands of God. Without the aid of modern maps, or compasses or navigational equipment, he relied totally on the guidance of the Holy Spirit to point him in the direction that God wanted of him and his band of disciples.

And everywhere he went, Columbanus preached that message.  We must all be prepared to let go and let God lead us.  His message was a call to conversion, an appeal to let go of earthly goods and to instead fix our gaze on God.

My brothers and sisters, as we prepare to celebrate these sacred mysteries, let us take a moment to acknowledge or sins, remembering the times when we have offended God in thought, word or deed, and have not been prepared to let go of earthly thoughts and temptations.

Fourteen hundred years ago on 23 November 615 a great Irishman, Saint Columbanus, died in Bobbio, Italy. His biographer, Jonas tells us:

Columbanus, who is also called Columba

Was born on the island of Ireland, which is situated on the outermost Ocean….

His namesake, St. Columba of Derry and Iona – St. Columcille – was about 22 years old when our Columbanus was born, somewhere in Leinster. From there the young Columbanus, Columban, went to Cleenish island on Lough Erne before becoming a monk in Bangor.

Then, at the age of 50, ‘he began to desire exile’ – ‘cepit peregrinationem desiderare – remembering the command of the Lord to Abraham,

Our second reading gives us an insight into the intensity and motivation of that desire, ‘The love of Christ overwhelms us’. The call to reveal the love of Christ to all, Christian or pagan, drove him.

His peregrinatio, his pilgrimage, brought him to France, Austria, and Italy, where he preached the word of God, founded monasteries, and trained saints. He also ran into storms. In France there were conflicts with the local bishops when he followed the customs of the Irish church, and when he criticized their sins.

Columbanus believed that such storms were nothing new, and that ‘the true disciples of Christ crucified should follow Him with the cross’. He could have been commenting on today’s first reading and gospel. The first brings us back to the beginning of the world. In it the Lord uses a remarkable image when he asks Job:

The sea appears as a very powerful, boisterous, noisy infant, leaping, tumultuous. It has to be pent up behind closed doors, confined by a bolted gate. Only God can do that; only God can set a boundary and say,

‘Come thus far … and no farther; here your proud waves shall break’.

In the gospel Christ and his disciples are in a boat crossing the Sea of Galilee. It’s evening, getting dark. Suddenly ‘it began to blow a gale and the waves were breaking into the boat so that  it was almost swamped’(Mk. 4:35-41). We can imagine it, quite a large rowing boat, cork-screwing up and down the waves, the sea smashing into it, four of the disciples rowing like mad, and the rest holding on for dear life.

And Christ – in the stern, his head on the cushion, asleep.

When they woke him he rebuked the wind, as he would rebuke a demon, and said to the sea, ‘Quiet now! Be calm!’ And the wind dropped, and all was calm again. He turned to the disciples and asked,

‘Why are you so frightened? How is it that you have no faith?’

We remember that Matthew softens his words, ‘Why are you so frightened, you men of little faith?’ But in Mark asks them, and us, bluntly, ‘How is it that you have no faith?’

Columbanus and his companions needed such faith. When the king of the Franks invited him to stay in his kingdom of Burgundy in eastern France Columbanus chose lonely, desert places in the forests, homes of wolves and bears, first Annegray and then Luxeuil.  At Annegray when one monk got sick Jonas says, ‘As the only nourishment they had was the bark of trees and some herbs they began to fast and pray that they might be able to procure some good food for the sick man’ (Jonas 8).

A storm struck when the local bishops objected to the Irish method for calculating the date of Easter.  Columbanus wrote to Pope Gregory the Great. He addressed him with great respect before saying – to the Pope – that he was surprised that he had not corrected the error of the French bishops. When he quoted St. Jerome in support of the Irish method he added a remarkable sentence,

‘For I admit to you simply, that anyone impugning the authority of St. Jerome

will be a heretic or reprobate in the eyes of the Western Churches, whoever

that man may be’, even a pope. [Imagine saying that to the pope]

In 603 the bishops summoned him to a provincial synod. He did not go. Instead he wrote them a letter, defending the Irish practice, and asking that the monks be allowed to continue to live in ‘the silence of these woods’. Then he went on, suggesting that they – the bishops – needed humility and poverty of spirit, and even hinting that among them were some, ‘who often look at women and who more often quarrel and grow angry over the riches of the world’.

Columbanus was even less diplomatic with the king. Theuderic married the daughter of the King of Spain, and rejected her a year later. He had four children, by four unnamed mistresses. Columbanus rebuked him, and he promised to reform, but did not. Eventually, in 610, he expelled Columbanus along with the monks from Ireland and Brittany. Armed guards brought him to Nantes.

While there he wrote to the monks still in Luxeuil, encouraging them to faith and unity, ‘For whatever you ask with faith and complete agreement shall be given to you’ (Letter IV). He feared that they would be divided, remembering that when he was still with them some sided with the French bishops about Easter, and many objected to the strictness of the rule.

‘I confess that I am broken on this account. While I wished to help all, who when

I spoke to them fought against me without cause, and while I trusted all, I have

As he wrote a messenger arrived to say ‘that the ship is ready for me, in which I shall be borne unwillingly to my country’. He wanted to continue his ‘pregrinatio pro Christo’, his pilgrimage for Christ. The love of Christ still overwhelmed him. And it seems that Christ acted, with a storm. As the ship that was to carry him to Ireland ‘was making for the open sea, with oar and sail, a storm arose and they were driven back to land, and the ship went aground’. The captain decided that it was not the will of God that they return to Ireland and put them back on shore.

They began to walk, a long pilgrimage, back across France, avoiding Theuderic’s kingdom of Burgundy, eventually reaching Metz. Some Burgundian monks from Luxeuil joined them there. King Theudebert, brother and enemy of Theuderic, granted Columbanus land at Bregenz in Austria.  Two years later, in 612, Theuderic defeated Theudebert forcing Columbanus, at nearly 70 years of age, to flee across the Alps into Italy and his final monastery in Bobbio.

We have experienced many storms: from the troubles here in N. Ireland to the scandals of child abuse, the scarcity of vocations to the priesthood and religious life, the banking crisis, and many, many more. There were times when we were tempted to ask if the Lord was in the boat at all. The oarsmen have grown weary.

Columbanus challenges each of us to dare to profess our faith openly. ‘What care I for saving face before mankind, when zeal for the faith must needs be shown?’ He used to retreat to a cave with the scriptures. Can we find a space, each day, to ‘listen for the voice of the Lord and enter into his peace’?

We can encourage each other. I’m regularly grateful when hearing confessions and I see the faith of ordinary men and women, struggling to be humble disciples and witnesses of Christ in their families and daily lives. I still have vivid memories of First Fridays in a parish in the Philippines. I’d visit all the sick in the town. One old lady I’d leave to the last. Others could be a bit depressing, but she always different. At 104 years old, stooped, deaf, she’d sit facing me, watching my lips. When we got to the Act of Contrition she’d get up, slowly kneel, and say, ‘Ginoo, pasayloa ako nga makasasala’, ‘Lord, be merciful to me a sinner’.  Her faith was contagious, and filled me with peace.

Each day we can discover that Christ is with us in the boat, even when the storm rages. At times he asks us ‘Why are you so frightened? How is it that you have no faith?’ But if like Columbanus we go into the cave regularly we’ll hear the risen Lord say, ‘Peace be with you. Go out to the whole world; proclaim the Good News to all creation’.