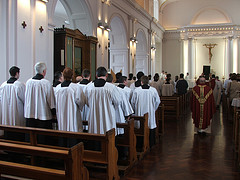 This afternoon Monsignor Hugh Connolly, the President of Saint Patrick’s College, Maynooth, welcomed the students and their families to Maynooth saying, “This is always an exciting time for the Seminary, when we prepare to receive the new students among us. Once again you come from a wide range of backgrounds, previous experiences, and the four corners of the country, but with one common factor – you are responding to an invitation given in and through faith, to become priests who will spread the Gospel in the years to come.  I thank the families and friends of the new candidates for their strength and generosity in supporting the men thus far, and I invited you to continue to provide this vital encouragement. The road ahead has many challenges.”

Bishop Donal McKeown, chairperson of the Council for Vocations of the Irish Episcopal Conference, highlighted the reality that the new seminarians have a long period of formation ahead, which will include human, spiritual, intellectual and pastoral development.

Bishop McKeown said, “The Catholic Church in which you will serve will be a much changed institution. Yet, despite the uncertainties of the future, all new seminarians are responding with hope to God’s never ceasing call to proclaim his kingdom.  God still has faith in people.  With grace and the vision of the Gospel, it is possible to build community, to promote healing and to build supportive relationships. God has asked you to accept His call to go out to the rich harvest where the labourers are few.”

The National Co-ordinator for Diocesan Vocation Directors, Father Paddy Rushe, also welcomed the 2011 figure of new seminarians for the Catholic Church.  Father Rushe commended the Vocation Directors from the various dioceses whose critical work over the year has accompanied these men in their discernment and preparation for seminarian life.

Monsignor Connolly asked the new seminarians to draw sustenance and hope from what the Holy Father, Pope Benedict XVI, said in his letter to seminarians of October 2010: “You have done a good thing. Because people will always have need of God, even in an age marked by technical mastery of the world and globalization: they will always need the God who has revealed himself in Jesus Christ, the God who gathers us together in the Universal Church in order to learn with him and through him life’s true meaning and in order to uphold and apply the standards of true humanity”.

– Today’s new entrants will bring the number of seminarians for Irish dioceses to over 90: 72 studying in Maynooth with the remainder in Saint Malachy’s Belfast, the Irish College Rome and in the Beda College which is also in Rome.

– Saint Patrick’s College Maynooth is the National Seminary for Ireland and has been forming men for the priesthood since 1795.  The Trustees of the College are the Governing Body of the College. The membership is defined by successive Acts of Parliament.  The current Trustees are the four Archbishops together with 13 other senior Bishops.  In the last five years the total annual number of new seminarians beginning their studies in Maynooth has been: 16 in 2010; 36 in 2009; 30 in 2008; 31 in 2007; 30 in 2006.

– The College comprises the seminary and the Pontifical University, offering degrees in theology, philosophy and theology and arts. An electronic map of the 26 dioceses of Ireland is available on www.catholicbishops.ie.  A breakdown, by diocese, of the 22 first year seminarians for 2011 is as follows: