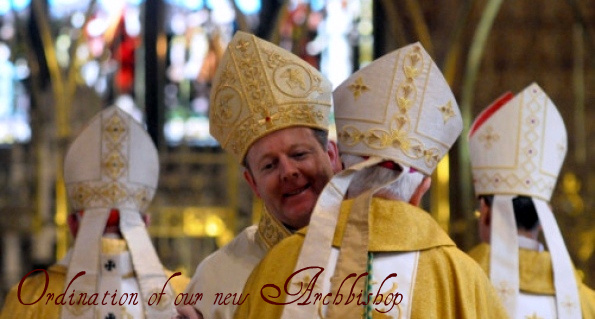 Commentry by Rev Paul Clayton-Lea at the Episcopal Ordination Ceremony

Photographs from the Episcopal Ordination of Archbishop Eamon Martin

The bells of St Patrick’s Cathedral rang out in joy today for the celebration for the Episcopal Ordination of Monsignor Eamon Martin as Coadjutor Archbishop of Armagh and successor of St Patrick. The chief-celebrant was Cardinal Seán Brady and the co-consecrators were Archbishop Charles Brown, the Apostolic Nuncio and Bishop Gerard Clifford, Auxiliary Bishop-Emeritus of Armagh.

34 archbishops and bishops concelebrated Mass along with over 300 priests. These included the Archbishops and Bishops of Ireland; The Archbishop of Westminster, Archbishop Vincent Nichols; The Archbishop Emeritus of Glasgow, Archbishop Mario Conti; The Diocesan Administrator of Kildare and Leighin Diocese, Monsignor PJ Byrne; The President of St Patrick’s College, Maynooth, Monsignor Hugh Connelly; The Director of Formation of the Irish College, Rome, Rev Hugh Clifford; The Abbots  of Mellifont Abbey, Dom Joseph, and Portnaglone Abbey, Dom Celsus; The Canons of the Metropolitan Chapter of Armagh Archdiocese; Classmates of Archbishop Eamon; Representatives of the priests of Armagh Archdiocese, (including the Vicar General, members of the Senate of Priests, College of Consulters, Vicars Forane), Administrator of St Patrick’s Cathedral Parish, Armagh; Administrator of St Patrick’s Parish, Dundalk; Secretary to the HE The Papal Nuncio, Monsignor Serrano and  Executive Secretary to the Irish Episcopal Conference, Monsignor Dullea. Over 100 priests of the Archdiocese of Armagh, 60 priests from the Derry Diocese, the Vicars General of the Suffragan Diocese and many Religious and visiting clergy also concelebrated the Episcopal Ordination Mass.

Seated in the front row at the celebration was Archbishop Eamon’s mother Catherine. His six sisters and five brothers, along with many of his relations and friends travelled from near and far to be part of the celebration.

There was a strong ecumenical presence at the Ordination Mass with the attendance of the Church of Ireland Archbishop of Armagh, Most Rev Richard Clarke, Very Rev Dr Norman Hamilton, Former Moderator of the Presbyterian Church in Ireland and Rev Ian D Henderson, Methodist Church in Ireland.  Many local representatives of other Christian communities were also present.

During the Episcopal Ordination Mass, the 1st Reading was read by Joseph Martin, a brother of Archbishop Eamon. The Psalm was sung by Marie-Thérese Devins, a sister of Archbishop Eamon. The 2nd Reading was read in Irish by Monica Gribben, a native of the parish of Armagh. A Deacon, Rev Paul Murphy, who will be ordained for the Archdiocese of Armagh this coming June, proclaimed the Gospel. Also assisting at the altar was Rev Micheal McGavigan, a deacon for the Derry Diocese. Serving the Mass were students from St Patrick’s College, Maynooth, Irish College Rome and the Neo-Cathechumenal Way. Severs from St Patrick’s Cathedral also assisted at the altar. Archbishop Eamon’s Archbishop Eamon’s Episcopal Ring, Mitre and Crozier are brought forward by members of his family and his friends: Mitre: Nóirín Boucher; Crozier: Martin McDaid; Episcopal Ring: Rosemary McDaid. The gifts at the offertory were carried forward by Ludivine Martin (Niece and God-child of Archbishop Eamon); Christopher Duggan (Nephew and God-Child of Archbishop Eamon) Lara and Garry Trainor (A couple who were recently married in the Cathedral). The Choir was the St Patrick’s Cathedral Choir under the direction of Mr Colm Murphy and the organist was Mr Philip Elliott and the assistant-organist was Mr James Murphy.

The Ordination Mass was streamed live on the diocesan website www.archdioceseofarmagh.com and on rte.ie.