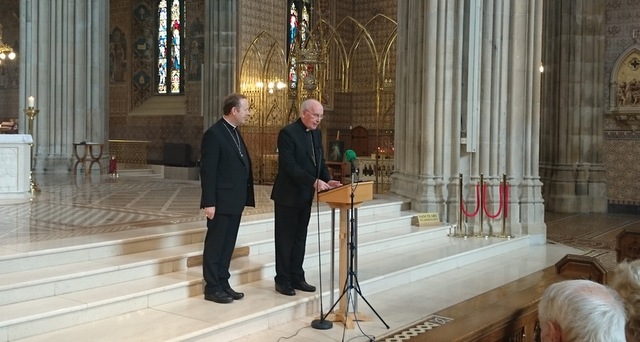 Media are invited to meet Archbishop Eamon Martin for interview this morning outside Saint Patrick’s Cathedral, Armagh, from 11:00am.

I am pleased that Pope Francis has today accepted the resignation which I offered to him on the occasion of my seventy fifth birthday. I warmly congratulate Archbishop Eamon Martin who today becomes Archbishop of Armagh, Primate of All Ireland and Coarb Phadraic. Let us rejoice and be glad.

I pray that God may give to Archbishop Eamon in abundance all the graces he needs and I assure him of my help and total support at all times. Indeed I am quite confident that the people of the Archdiocese – priests, religious and lay faithful – will give to their new Archbishop the same whole-hearted support and faith-filled loyalty which they have always given to me and for which I will be eternally grateful.

Above all I want to take this opportunity to say thanks to the people, priests and religious of the Archdiocese of Armagh for their welcome, friendship and so much kindness over many years. It has been a great joy and privilege for me to serve as their Bishop and also to travel and meet people from all over Ireland in my role as Primate. I am very grateful to the leaders and members of the other Churches in the archdiocese and throughout Ireland and to all who have assisted me in any way to spread the Good News of Jesus Christ. The people of this Cathedral City of Armagh have been so good to me and will, of course, always remain close to my heart. I thank the City Council and send greetings today to all of you who live and work in this historic city.

When I became a Bishop, I chose as a motto: ‘To know Jesus Christ’. The diocese has adopted as its aim: ‘To become the Body of Christ so as to bring the compassionate love of Christ to all’. I hope to live near Armagh and to continue pursuing these aims by helping out pastorally wherever I can and whenever I am needed. I am looking forward to retirement and, no doubt, it will take me some time to get used to it, but it will be good to have more time for family, friends and to follow the football!

Today I give thanks for many things. I thank God for all the graces and favours of so many happy years as a priest and as a Bishop. On this feast of her birthday, I give thanks to Our Lady for her loving protection down the years and the great happiness of going so often to her Shrines, especially Knock and Lourdes.

I thank the Bishops and staff of the Irish Bishops Conference, especially Bishop Gerard Clifford who was my auxiliary for many years. They have been a great support to me as President of the Bishops’ Conference. I thank my family, staff and friends for their patience and understanding.

It has been my privilege to have been appointed a Bishop by Pope St John Paul II, to have worked closely with Pope Benedict XVI, and to have taken part in the Conclave that elected Pope Francis – that conclave has been the highlight of my life!

Pope Francis’ motto: “Miserando atque eligendo“, challenges and inspires me with its message of God having mercy and at the same time choosing us, despite our sinfulness. It reminds me that I too need to say sorry and to ask forgiveness. And I do so again, now. At the same time, Pope Francis’ motto inspires me to trust in the mercy of God and to pray for the strength to do always as Jesus would have me do.

The people of the Archdiocese of Armagh and the people of Ireland will remain in my prayers for the rest of my life. I ask the favour of your prayers to help me continue to serve God as best I can all the days God gives me. God bless you always.

My brothers and sisters, there is a line in the letter to the Hebrews: ‘Every day, as long as this today lasts, keep encouraging one another (Heb3:13). Much of my life as a priest has been about encouraging people with the Good News of Jesus Christ, offering them ‘fresh heart’, even in the most troubled moments of life. But equally I have discovered that, as well as giving encouragement, I too need to receive encouragement. I am blessed with a wonderful family and very special friends who never stop encouraging me. I am very grateful also for the warmth of your support, welcome and prayers, not just today, but every day since I came to Armagh, sixteen months ago.
Thank you Cardinal Sean for your encouraging words, your good wishes and the assurance of your prayers. This is not just my day. It is a day for us to recognise the years of service which you have given to the Church in Armagh and beyond. On behalf of the people, priests and religious of the Archdiocese of Armagh, I want to thank you sincerely for serving us with love and dedication. We appreciate all that you have done for us and we assure you of our continued affection and prayers. We wish you every blessing for a healthy and peaceful retirement.

During my years as Executive Secretary to the Irish Bishops’ Conference I saw at first hand the mammoth amount of work undertaken by Cardinal Brady as President of the Episcopal Conference and his tireless commitment to representing the Catholic Church in Ireland at countless national and international engagements. At the same time he always presents as a gentle and humble man who is never fully comfortable in the limelight. I want to thank Cardinal Sean personally for the kindness he has shown me since I came to Armagh last year, and for allowing me every opportunity to get to know the diocese. I know that I can count on his prayers and support in the years to come.

I genuinely feel honoured to assume the role of ‘Shepherd’ in the Archdiocese of Armagh. I look forward to serving the people of sixty-one parishes in the counties of Armagh, Derry, Louth and Tyrone. I feel humbled to be following in the footsteps of St Patrick, and like him, I pray for ‘God’s strength to pilot me, God’s wisdom to guide me, God’s shield to protect me’. Over the past sixteen months I have been encouraged and inspired by the enthusiasm of our young people and the dedication of our teachers, the commitment and pastoral care given by our priests and religious, and the willingness of so many people to become actively involved in the life of their parishes and diocese.

I was ordained a bishop just a month after the election of Pope Francis. I chose my episcopal motto to be: ‘Sing a New Song to the Lord’, because I think we are all being challenged nowadays to find fresh ways of bringing the Gospel into the world. Pope Francis inspires us to write that new song in a ‘missionary key’, and reach out to everyone in society with the love and friendship of Jesus. People have been asking me to put ‘fresh heart’ into the renewal of the Church in this country. But I am only one person with all my inadequacies and sinfulness. The task of bringing the encouragement of faith to the world belongs to all of us – people, priests, religious sisters and brothers, bishops – working together in communion with Christ and with one another. I am certain that a humble renewal in the Church in Ireland will only come about as our lay people exercise their specific vocation and mission to hand on the faith and to insert the Gospel into the reality of their daily lives and work.

I pray that my heart can be more like the Heart of Jesus, burning with love for everyone. Not far from all of us today are people who feel isolated or lonely; people whose hearts are heavy with worry, illness or anxiety; perhaps someone whose heart is broken by grief or loss; a man or woman whose heart has grown colder because of some cruelty or emptiness in their lives – past or present. Every day, then, as long as this today lasts, let us keep encouraging one another with the love and compassion of Christ.

On this, my first morning as Archbishop of Armagh, I greet the leaders and members of the other Christian Churches and traditions; I hope that, as Cardinal Sean did before me, I can share their friendship and their passion for the Gospel of Christ. I also send my good wishes to people of other faiths and traditions, and to civic and political leaders throughout the diocese, assuring them of my respect and cooperation with them in serving the common good.

No doubt many challenges lie ahead of me, but I look forward with trust and hope in God to sharing with others the ‘Joy of the Gospel’. Please pray for me. I invite you to join me as I offer Mass in a few weeks’ time to ask God’s blessing and the protection of Mary at this important milestone for me and for the Archdiocese. The Mass will take place in the Cathedral at 7.30 p.m. on Tuesday 7th October, the Feast of the Holy Rosary, and everyone is welcome.

Eamon Martin was born on 30 October 1961 in Pennyburn, Derry.  His mother Catherine Crossan lives in Derry and his father John James Martin is deceased (RIP June 2006).  He comes from a family of twelve children – six boys and six girls.

Archbishop Martin attained a BSc (Hons) in Mathematical Science from NUI Maynooth; BD (Hons) Theology from the Pontifical University, Saint Patrick’s College, Maynooth; PGCE from Queen’s University, Belfast; National Professional Qualification for Headship from the Institute of Education, London; and an M Phil Degree of Master of Philosophy from the University of Cambridge.

Archbishop Martin has been a regular media contributor on BBC’s Thought for the Day; Prayer for the Day and celebrant and preacher on Sunday Morning Worship, and other programmes on RTÉ, BBC Radio Ulster, BBC Radio 4 and the BBC World Service.

Archbishop Martin has a keen interest in music, particularly in choral and classical music as well as liturgical music generally.  He has a particular interest in Sacred Music, especially Gregorian Chant. He is also enjoys walking and gardening.