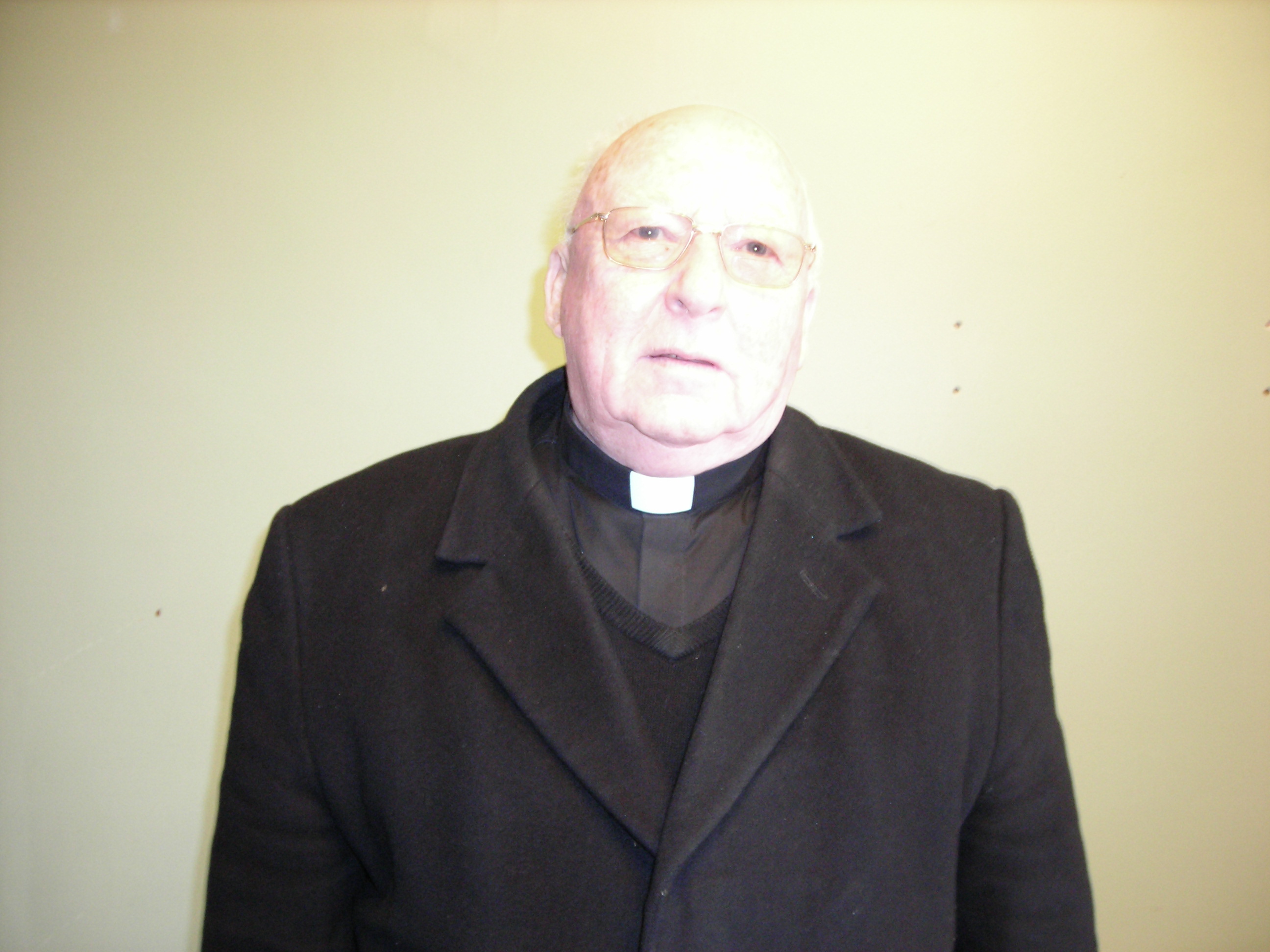 I think there’s something appropriate about that phrase in today’s first Reading where it says, “Cling to the Lord and don’t keep your distance from Him, so that you may find strength at the end of your life”. I believe that the man whom we honour today in this funeral liturgy did indeed cling to the Lord all the days of his life and I like to think that the Lord honoured him by giving him strength and peace at the end of his life. The circumstances in which Fr Aloysius McCourt was found on Friday morning – in his Oratory, before the Blessed Sacrament, with his Breviary – must have been a dreadful shock for his devoted housekeeper Bernadette Devlin, but it was so fitting, so lovely, the way no doubt many a priest would like to meet the Lord at the end of his earthly life.

And that same Lord who called him so suddenly and unexpectedly was an intimate part of Aloysius McCourt’s life, from the day he was baptised by Fr Mark Quinn in Dungannon parish on 25th July 1931. Having attended the Presentation Brothers School and St Patrick’s Academy, he took up employment in Quinn’s of the Milestone, but the young Aloysius must have felt that the Lord was calling him to something more for in 1956 he joined the Alexian Brothers in Cobh, in Co Cork.

Again to borrow words from the First Reading, “My child, if you come forward to serve the Lord, prepare yourself for testing”. Being an only child, and with a family grocery shop in Irish Street, Aloysius came back to Dungannon when his mother was taken ill in 1959. But he continued to cling to the Lord – he joined St Vincent de Paul, he was in the Legion of Mary, he helped start a Youth Club and most significantly of all, he established the Catholic Boy Scouts, which still flourishes to this day as 1st Tyrone Scout Group.

Having worked in the Observer shop in Irish Street, he joined the newly founded Tyrone Crystal where he worked in the Quality Control Department. But that sense of being called by the Lord continued to haunt him and in May 1981he left Tyrone Crystal to study for the priesthood in St Kieran’s College, Kilkenny.

On 2nd June 1985Aloysius McCourt was ordained to the Priesthood by Cardinal Tomas O Fiaich in his beloved Church of St Patrick, Dungannon. That was a vintage year for the Archdiocese of Armagh, with no less than eight ordinations!  Like all candidates for priesthood, Aloysius was given solemn instructions on that day. In the words of the Ordination Rite he was told to “Meditate on the Word of God; believe what you read, teach what you believe and put in to practice what you teach”.

And so indeed he did. Wherever Fr McCourt served, and as you know he served in a number of parishes in South Armagh and in mid Tyrone, he was attentive to his priestly duties, caring for the sick and bereaved, visiting schools and celebrating the Sacraments. He had a particular devotion to Our Lady and as far back as 1950 he organised pilgrimages to Lourdes, beginning with fifty scouts who travelled overland and subsequently, wherever he served, he made it possible for countless men and women from various parishes to go to Our Lady’s Shrine.

There is a truth in the words of St Paul in today’s second Reading, when he says, “The life and death of each of us has its influence on others”.  And that applies in a particular way to Fr McCourt’s  ministry here in the parish of Ballyclog and Donaghenry. For the past twelve years he has shared in the joys and sorrows of people in this community and has in his own inimitable way contributed to the up building of God’s Kingdom.

His influence will live on for some people in a very personal way because of his pastoral care; for others it’s the memory of his cheerful greeting and his lively humour and for some it might be the recollection of a sharp remark or a challenging comment. I’m sure we will hold those memories long in to the future as we recall his presence among us in story and in prayer.

Here in Stewartstown he was something of a patriarchal figure, the centre piece of the community, the one who was very much at home among the people he loved. I think it’s true to say – he appreciated your kindness; he eagerly accepted your attention and he usually ignored your advice. He was very much his own man – a staunch nationalist, he loved all things Irish; an orthodox Catholic, he defended everything traditional.

And now that this colourful, sometimes stubborn and often generous man has been taken from us, we pray that others will follow in his footsteps. On this occasion we pray that the Lord will continue to touch the hearts of some young men, or maybe not so young, and prompt them to consider the call to priesthood.

I have no doubt Fr Aloysius McCourt could make his own the words of Martha in today’s Gospel, “Yes, Lord, I believe you are the Christ, the Son of God, the One who was to come in to this world”. That utter trust in the promise of Jesus, that belief in the Resurrection, that conviction in eternal life was the very texture of Fr McCourt’s faith. And so we pray that the Risen Lord will come to meet him. May he be merciful to him, embrace him in love and lead him in to the company of Our Lady and all the saints. And may his soul and the souls of all the faithful departed through the mercy of God rest in peace.

Word of thanks by Fr Eugene O’Neill

On behalf of Fr Byrne our Parish Priest, who sadly cannot be with us today, I would like to take this opportunity to express our sincere condolences to Fr MacCourt’s family and friends and to you his parishioners.

Over his 12 years here he was a huge character who has made a huge impact on people’s lives and no thanks can ever repay him for his efforts, labours, time and love.

Sincere thanks to all those who helped prepare his funeral obsequies, especially his housekeeper and friend Mrs Bernadette Devlin and Mr Bertie Foley.  To all those who took part in the various liturgies over the past few days, and gave so generously of their time in any way.

A special word of thanks to Archbishop Martin for leading us in this celebration.  Also to Dean Curry for his moving sermon, and also for his great assistance in preparing for this Mass.  So too, grateful thanks to Fr McAleer and Mr Brian Slater for their conduct of this liturgy, and to all the priests, his classmates and confreres for being here today

But thanks, most of all of to you, the good people of Stewartstown for the love, respect and dignity you have accorded Fr MacCourt not only in these last few days, but throughout the years he ministered here.

It is only when we lose something we treasure that it’s true worth is known to us.  During Fr MacCourt’s time here, he shred in all the great moments of this parish, he was there in joyous and sorrowful times to help and to bring love, faith and goodness to every occasion.  And you welcomed him not just as a priest, but as a neighbour and a friend.  And while he may be gone, know that through all you did for him you made his time in Stewartstown the most happy of his life and his ministry.

Refreshments will be served in the Gables restaurant after Mass for Fr MacCourt’s family, friends, clergy and for all those who have travelled to be here today.

Finally, as we remember Fr MacCourt in our prayers in the days to come, let us remember also each other, that God in his mercy, may ease our sorrow, and through his kindness may leave us to treasure the legacy Fr Aloysius, our priest and our friend has left us all.  And with those memories, build a lasting monument to him with your lives.  Take all he gave you, and in honour of him, live everyday with lives of love, faith and hope.