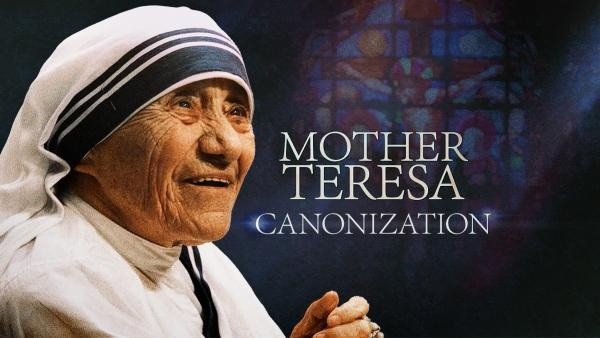 Canonization of Blessed Teresa of Calcutta

Pope Francis will declare Blessed Teresa of Calcutta a saint at the Vatican on Sunday 4th September. Mother Teresa was widely known as a living saint as she ministered to the sick and dying in some of the poorest neighbourhoods of the world. Her simple service touched the hearts of millions of people of all faiths. Born to an ethnic Albanian family in Skopje, in what is now part of Macedonia, she went to India in 1929 as a Sister of Loreto and became an Indian citizen in 1947. She founded the Missionaries of Charity in 1950. Shortly after she died in 1997, St John Paul II waived the usual five-year waiting period and allowed the opening of the process to declare her sainthood. She was beatified in 2003. The date chosen for her canonization is the eve of the 19th anniversary of her death and the date previously established at the Vatican for the conclusion of the Year of Mercy pilgrimage of people like her who are engaged in works of mercy. Mother Teresa once wrote “If I ever become a saint – I will surely be one of darkness – I will continually be absent from Heaven – to light the light of those in darkness on earth”.

Quotations from Blessed Teresa of Calcutta

“By blood I am Albanian, by citizenship, an Indian, by faith, I am a Catholic nun. As to my calling, I belong to the world. As to my heart, I belong entirely to the heart of Jesus”.

“Spread love everywhere you go and let no one ever come to you without leaving much happier”.

“Love begins at home and it’s not how much we do that matters but rather, it’s how much love we put into the action that matters most”.

A special Mass of Thanksgiving to celebrate the Canonization of Blessed Teresa of Calcutta in St Malachy’s Church, Armagh on Monday 5 September at 7.30pm. The main celebrant will be Archbishop Eamon Martin and all are welcome.