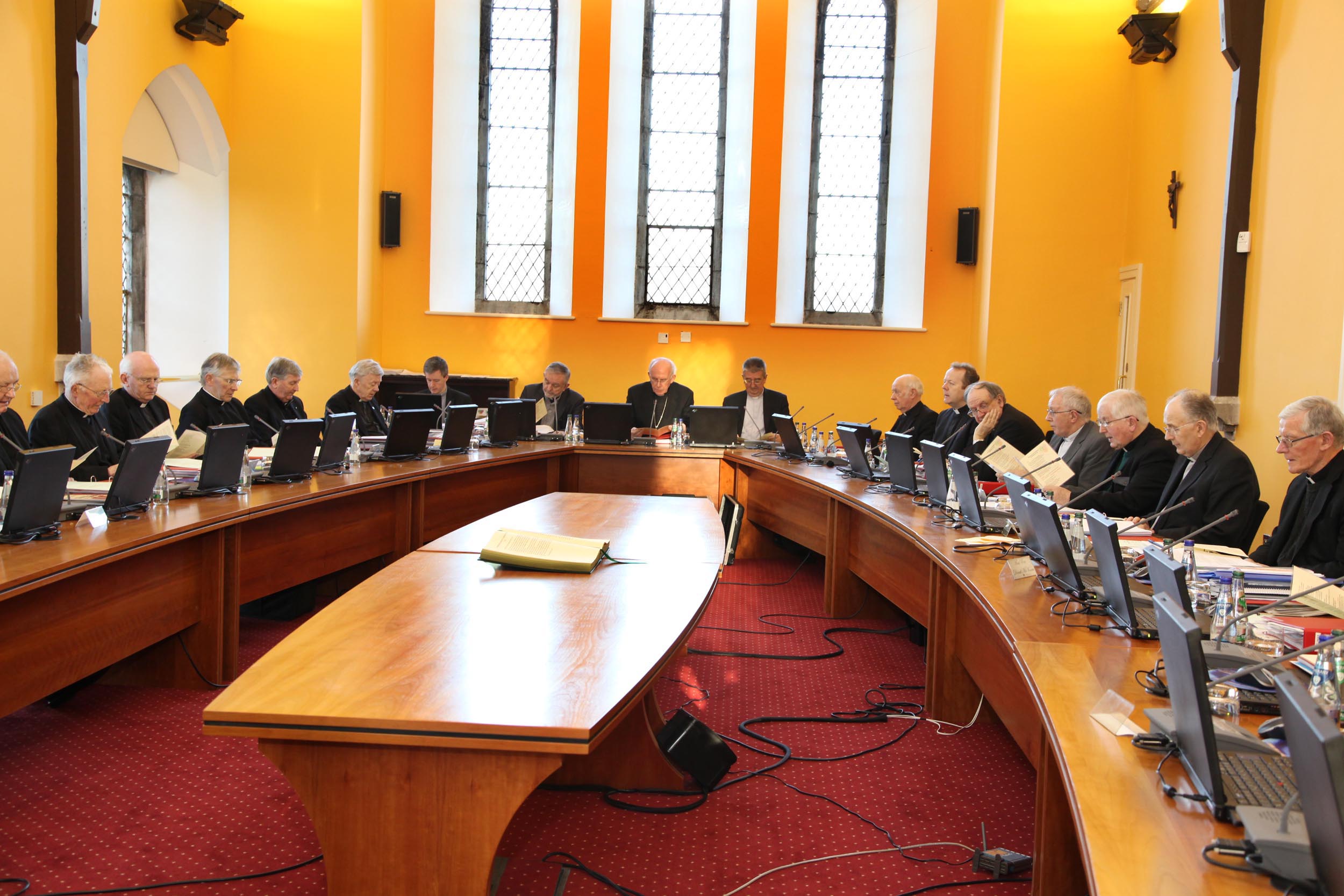 The Spring 2018 General Meeting of the Irish Catholic Bishops’ Conference concluded this afternoon in, Columba Centre, Saint Patrick’s College, Maynooth. Bishops prayed for those who suffered across the island as a result of the extreme weather conditions over the past week. Bishops paid tribute to the level of community spirit which prevailed in parishes during this difficult time as well as acknowledging the bravery and commitment of the women and men of the emergency services voluntary agencies who assisted those in need.

Yesterday the Bishops’ Conference published Our Common Humanity in support of unborn human life, and members spoke to the media on the statement:
https://www.catholicbishops.ie/2018/03/06/our-common-humanity-statement-on-the-second-day-of-the-spring-2018-general-meeting-of-the-irish-catholic-bishops-conference/

The following issues were also discussed by the bishops during their three-day meeting:
• Child safeguarding in the Catholic Church
• Prayer for the protection of life from the moment of conception until natural death
• Update on preparations for the World Meeting of Families 2018
• Trócaire’s 2018 Lenten Campaign on humanitarian crises around the world
• Saint Patrick’s Day, Saturday 17 March
• Lent and preparation for Easter

Irrespective of improved standards, vigilance and greater awareness, bishops agreed that the Church can never become complacent concerning the safeguarding of children. Bishops reflected on the immense suffering caused to children and vulnerable persons by abuse. They emphasised the shared responsibilities of Church and statutory authorities for prompt reporting, robust risk assessment, concrete action to prevent further abuse, and meaningful outreach to victims in support of the healing process and to assist their search for justice. Bishops reiterated their commitment to both the review process of dioceses undertaken by the National Board and their full cooperation with any inquiry required by statutory bodies.

The first takes place this weekend, 10 and 11 March, as dioceses throughout the country will participate in the ‘24 Hours for the Lord’ initiative of Pope Francis so as to experience the Lord’s loving mercy in the Sacrament of Reconciliation and to find opportunities for prayer. 24 hours of continuous Confession will be provided in designated churches and details will be available on diocesan websites. Sunday 11 March is Mothers’ Day and bishops encouraged the celebration of mothers and motherhood in Ireland through prayer and action.

Bishops offered their support to the ‘Savethe8th’ rally which will take place in Dublin on Saturday, 10 March.

The second weekend of prayer will take place across the country on 8 April, Divine Mercy Sunday, and also on Monday 9 April, the Feast of the Annunciation of the Lord.

The www.chooselife2018.ie website has been updated to offer visual and text resources to assist parishes in promoting the sanctity of human life. It hosts issues of the weekly Choose Life newsletter.

Supreme Court judgement
Noting today’s decision of the Supreme Court, the bishops commended to the faithful their pastoral message, Our Common Humanity, which was published yesterday, 6 March. In particular:
“Every one of us has a right to our life. It is not given to us by the Constitution of Ireland or by any law. We have it ‘as of right’, whether we are wealthy or poor, healthy or sick. All human beings have it. For us as a society to now declare that any category of human being should have that right taken from them would be a shocking step. It effectively says that unborn children do not exist or, if they do, they do not count. That is a manifest injustice.”

• Update on preparations for the World Meeting of Families 2018
With six months to go until the 9th World Meeting of Families begins in Dublin, Father Timothy Bartlett, secretary general of WMOF2018, updated the bishops on the ongoing preparations for this universal celebration of families and faith which will take place from 21 – 26 August on the theme: ‘The Gospel of the Family: Joy for the World’.

Father Bartlett highlighted the release of the three-day preliminary programme for the Pastoral Congress of the WMOF. This will take place in the RDS during the first three full days of WMOF, from 22 to 24 August. Bishops were also updated on the need for more volunteers, that over 5,500 pilgrims have registered from 64 countries and on the continuing requirement for host families in the greater Dublin area for our visiting pilgrims from abroad.

Some of those confirmed for the Pastoral Congress include: Cardinal Oswald Gracias, Archbishop of Bombay, India; Cardinal Joseph Tobin, Archbishop of Newark; Cardinal Kevin Farrell, Prefect of the Dicastery for Laity, Family and Life; and Cardinal Seán O’Malley OFM Cap, Archbishop of Boston. The panel discussions at the Congress will include parents, priests and religious, and various specialist speakers and they will cover themes such as the effect of technology on family life, the witness of women in leadership, Pope Francis on the vocation of fatherhood; the joys and challenges of parenting, supporting newly married couples in the parish, families and parish supporting families with special needs; and, dignity and safety in the digital age. All of the themes chosen for workshops and panel sessions relate to topics discussed by Pope Francis in his Apostolic Exhortation of 2016, Amoris Laetitia (The Joy of Love).

To book tickets to attend the Pastoral Congress in the RDS, the Festival of Families, and for the closing Mass of the WMOF, please register on www.worldmeeting2018.ie

• Saint Patrick’s Day and asylum seekers
As we approach 17 March, bishops prayed through the intercession of our national patron, Saint Patrick, for the faith and well-being of Irish people everywhere around the world.

Saint Patrick, himself a migrant, was called to serve and bring God to a people far from his home. Bishops encouraged the faithful to pray for migrants, and all who struggle to live and integrate into new cultures, at home and abroad, arising from displacement and poverty. As Saint Patrick’s Day is a Holy Day of Obligation for Catholics in Ireland, the best way to remember our saint is to attend Mass.

Direct Provision Centres
Following last month’s decision by the Supreme Court that the ban on the employment of asylum seekers was unconstitutional, bishops look forward, with a keen interest, to a change in the Government’s commitment to allow those in direct provision centres to work – irrespective of their current qualifications – and thereby acknowledge their God-given gifts and human dignity.

• Trócaire’s 2018 Lenten Campaign on humanitarian crises around the world
The keynote speaker for the 2018 Trócaire annual lecture was David Donoghue, the Permanent Representative of Ireland to the United Nations in New York, who spoke in Maynooth yesterday on the theme, ‘Leaving no one behind: can the promise be fulfilled?’ In this talk Mr Donoghue reflected on the Sustainable Development Goals of 2015 which marked an historic agreement by 196 countries to end poverty and put the world on a path to sustainable development. He also analysed the changing global context and whether the commitment to ‘leave no one behind’ can be achieved.

This year’s Trócaire Lenten campaign highlights the story of Kumba, a seven-year-old girl from Sierra Leone who six months ago narrowly survived a mudslide. Over 1,000 people in her community lost their lives in the space of just four minutes when the mudslide hit after heavy rains. Kumba and her family escaped unharmed but their home was destroyed, along with all their belongings. The campaign focuses on the growing number of people being affected by humanitarian crises around the world. From those displaced by violence to families facing threats from climate change and natural disasters, Trócaire’s work is increasingly focused on supporting people who have been forced from their homes.

Bishops expressed their deep gratitude to families, schools and parishes, all over Ireland, for their generosity towards last year’s Lenten appeal which raised €8.5m, an increase of €1.1m on 2016. The money raised each Lent allows Trócaire to support over two million people in the developing world and bishops asked people to give generously again to this year’s Trócaire Lenten campaign.

• Lent and preparation for Easter
As we journey through the season of Lent let us remember “God never tires of forgiving us” (Pope Francis, Evangelii Gaudium The Joy of the Gospel). The call to renewal in our Christian life is a central part of our preparation for Easter and bishops ask the faithful to offer up their fasting, prayer, reading of Scripture and works of mercy during Lent for the grace of spiritual renewal.

As part of our Lenten journey the faithful are encouraged to participate in the ‘24 Hours for the Lord’ prayer initiative in their diocese and to read Pope Francis’ message for Lent 2018 on the theme Because of the increase of iniquity, the love of many will grow cold (Mt 24: 12). The message is available with additional online resources on www.catholicbishops.ie.