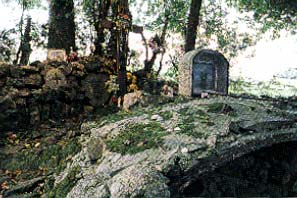 St Mochua’s real name was Cronan Mac Lonain. His father was Lonan and his mother Fineachta, daughter of Loichin. He was born in 567. His pedigree can be traced to Eactach Finn Fuaith Airt. He was of Connacht origin, belonging to the tribe of Lugne, in Co. Sligo. In early life he was a soldier and perhaps a pagan. He gave up his military career to become a Christian cleric at the age of about 30. He established a monastery in Co. Laois where he spent another 30 years. When about 60 years old and wishing for great seclusion he set out for the north. He landed in the land of the Airgialla and finally settled in Derrynoose in Co. Armagh. There he built a church and spent the remainder of his life, dying aged 90 on Christmas Eve, 657. A Holy Well is located close by the ruins of that Church and has been associated with the Saint through the centuries to the present day.

St Mochua’s well is located on the Fergot Road about half a mile south of Derrynoose Church. Today it is frequently visited by those with devotion to St Mochua, to bathe in the waters in hope of a cure. St Mochua is said to be powerful in the cure of eye complaints. Pilgrims arrive on three successive evenings after sunset, bathe in the waters and make devotion to the Saint. It is customary to leave some article at the well, generally the piece of cloth used in bathing.

Tradition or folklore tell us that the well was formerly on the opposite or south side of the road to where it is currently located but that some “malefactors” filled it with filth, whereupon it burst out on the opposite side of the road. It is also said that there is no spring in the well but that it has never been known to go dry even in periods of prolonged drought as in the drought of 1976.

(Abstracted from the Souvenir Brochure of the Official Opening of Páirc Naoimh Mochua, Derrynoose, 10 July, 1983.)