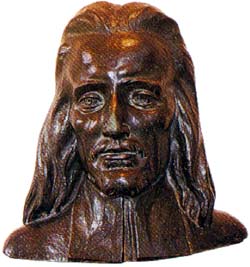 The accepted date of Oliver Plunkett’s birth is 1 November, 1625. He belonged to the Co. Meath branch of the Plunkett family of Norman lineage but by the time of Oliver’s birth the Plunketts had been at least three centuries in Ireland. The Plunketts were much involved in the Confederation of Kilkenny and presumably the young Oliver came into contact with the papal representative, Father Scarampi, and travelled to Rome with him in 1647. Here he entered the Irish College and after seven years study he was ordained priest on 1 January, 1654. He asked to be excused from immediate fulfilment of his student oath to return to Ireland to serve as a priest. He became a chaplain in Rome with the Oratorian Fathers and devoted himself to the study of law at the university of Sapienza. In November, 1657, he was appointed professor of theology at Propaganda College and held this position until his appointment to the See of Armagh in 1669. Having being ordained bishop in Ghent in December 1669 he arrived in his diocese in March 1670. When he returned from Rome as archbishop of Armagh he found the Church here shattered by Cromwell’s persecution, bishops had been put to death or driven into exile, churches and schools destroyed, priests deprived of education and demoralised, the people like sheep without a shepherd.

Oliver Plunkett’s episcopate lasted nine years and nine months. A change in Viceroy within a few months of his arrival back in Ireland resulted in his having an almost completely free hand and being a zealous courageous bishop he was in a hurry to reorganise the Irish Church after the Cromwellian devastation and confiscations. Although there was some opposition from the Armagh clergy to Oliver as a Meath man and the cleaveage between Old Irish and Anglo-Irish was still wide after the bitter divisions that arose during the Confederate war he was on the whole well received in his archdiocese. 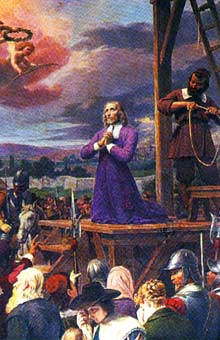 His immediate pastoral activities included ordinations, the administration of the sacrament of Confirmation to more than 10,000, young and old, in his first year as archbishop and the deposition of the vicar-apostolic in Derry. He held two diocesan synods, founded the Jesuit schools at Drogheda for the education of youth and the training of priests.

He worked hard to remedy the defective education of many of his priests and set a high value on learning for leadership among the clergy. The schools he had established at Drogheda, though short-lived, were among the more important achievements of his ministry.

Peace making was a notable part of his mission. To diocese after diocese in the north he brought peace where before there had been discord. One difficult task for the archbishop was to persuade the tories (the now landless Catholics waging a war of revenge against the new social order created by the confiscations of the 1640s and 1650s who often brought trouble on their local districts) to make their peace and be reconciled. He won for himself the respect of non-Catholic brethren, lay and ecclesiastical, not by any sacrifice of principle but by being patently a man of God and a man of peace. The governor of the province of Ulster invited him to come into his courtyard at Dungannon to give Confirmation. At heart Oliver had sympathy for the plight of the old noble Gaelic families. He could write of them: “It would break your heart to see the great families ….. who were great princes until the time of Elizabeth and King James …. to see them and their children deprived of their property and the means of supporting their children or of giving them an education”. But his compassion for them, however, did not extend to helping them politically or temporally and from the beginning had resolved to shun involvement in temporal affairs.

Courage and fortitude in the face of adversity Oliver practised in a high degree and is perhaps the outstanding trait of his character which appears in his letters. He was a man of principle, and having accepted the burden of episcopal office he did not see how he could shrink from the reforms which were so necessary in the Ireland to which he had returned. He is described by his best friend, Bishop Brenan, (later archbishop of Cashel) as touchy and hot-tempered. Perhaps it was this hasty temperament, a combination of his zeal and notion of discipline and authority, and some lack of appreciation on his part of the human problems of people who were the victims of situations in difficult times before he arrived, that led him into disputes. There was resentment towards him from some vicious clergy with tory associations whom he disciplined. He and his compatriot, Archbishop Talbot of Dublin, engaged in an unseemly personal dispute on primatial rights. The Franciscans and their many laity friends were openly hostile to him when, on the question of respective rights of questing as between the Franciscans and the Dominicans, he decided uncompromisingly in favour of the Dominicans.

Oliver’s friendly relationship with Viceroy Berkeley, Henry More, First Earl of Drogheda, Archbishop Margetson of Armagh, and the Earl of Charlemont helped him to discreetly pursue his pastoral work. Peace alternated with oppression depending on the general political situation in Britain. A wave of persecution followed the edict of expulsion from Ireland of all prelates and religious in 1673. The schools in Drogheda were closed. The archbishop himself had to go into hiding and suffered many privations. In a letter of 15 December 1673 he wrote: “I count myself fortunate now and again to obtain a little barley bread, and the house where Bishop Brenan (of Waterford) and I are is made of straw and is roofed in such a way that from the bed we can see the stars and at the head of the bed every small shower of rain refreshes us; but we would rather die of hunger and cold than abandon our flocks”.

Gradually the persecution abated but in 1679 the primate fell victim to the political intriguing of the Earl of Shaftesbury and the false revelations of Titus Oates of a Catholic conspiracy to kill the King and overthrow Protestant power in England. He was arrested on the orders of Viceroy Ormond and brought to Dundalk to stand trial on a charge of treason. False witnesses, who sought their own release from jail on promise of pardon, failed to appear at the trial and it was unfairly transferred to London. The sham trial there, tarnished by false witnesses did not allow enough time for Oliver to bring his witnesses from Ireland. On 8 June, six days before their arrival, he was put on trial and found guilty of high treason. A week later he was sentenced to die by being hanged, drawn and quartered at Tyburn on 11 July, 1681.

In 1920 Oliver Plunkett was beatified by Pope Benedict XV and on 12 October 1975 he was canonised by Pope Paul VI. His feast is celebrated on 1 July.

Two close friends of the martyr took possession of his remains. The head was placed in a “round tin box” and the two forearms were disjointed and placed in a “long tin box”. The rest of his body was buried in St Giles Cemetery. These remains were afterwards exhumed in 1683 and sent to the Benedictine Monastery in Lambspring, Germany. Two hundred years later they were transferred to the Benedictine Monastery of Downside, England.

In 1683 Fr Corker, a fellow prisoner of Oliver’s who became his spiritual director and executor, was released from prison and brought the head to Rome where he gave it into the care of the Dominican Cardinal Howard, who finally, sometime after 1722, gave it to Hugh McMahon on his appointment in Rome to the diocese of Armagh. Dr McMahon on his arrival in his diocese gave the “precious relic” into the safe keeping of the Sienna nuns in Drogheda. The Sisters looked after it for about 200 years until Cardinal Logue, after Oliver’s beatification in 1920, sought Rome’s permission to have it transferred to the new parish church of St Peter’s – with the secondary title of “Oliver Plunkett Memorial Church”. The Relic was installed in St Peter’s Church on 29 June, 1921 and has remained there since. It was carried in public procession on 30 September, 1979, for the visit of Pope John Paul II to Killineer, just outside Drogheda. A beautiful new shrine in honour of Saint Oliver Plunkett was unveiled and dedicated by Cahal B. Cardinal Daly on Sunday 7 May, 1995.