The record of the coming of Christianity to Ireland is obscure, even confusing. Traditionally, St Patrick was credited with converting the entire Irish race from paganism in the years 432-461. However, modern research has shown us that there were Christians in Ireland before the advent of St Patrick and that by the time our national apostle had begun his mission here the foundations of the Celtic Church had already been laid. The dates of his birth and death are disputed but it is agreed that he flourished in the fifth century.

Two Latin texts written by Patrick himself, neither of them autobiographical, are the sole contemporary witness to his life and few scholars today question the authenticity of the Confession and the Epistola. The first named gets its title from a sentence in its final chapter – “This is my confession before I die” – and was composed before the end of the author’s life. The second named, the Epistola probably predates the Confession and its composition was occasioned by a raid made by Coroticus and his soldiers on a group of Patrick’s neophyte Christians in Ireland.

What do these sources tell us about Patrick? We are given some family details in the Confession: “My father was Calpurnius who was a deacon and a son of the priest Potitus. He ministered in a suburb of Bannaven Taberniae where he had a country residence nearby. It was there I was taken captive. I was about sixteen years of age and I did not know the true God”. He elaborates only to mention his enslavement for six years in Ireland, his escape from the country and his eventual decision to return. Patrick tells us of a dream in which people living beside Silva Vocluti near the “western sea” besought him ‘to come and walk once more’ among them. He answered that call, returned to Ireland, and never seems to have left. His ambit, apparently, was the northern half of Ireland. 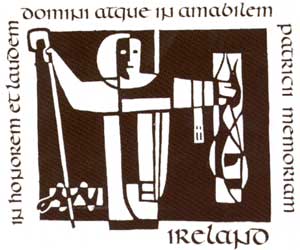 The fifth century Ireland to which Patrick returned had a sparse and widely scattered population of perhaps half a million with no towns or cities. It was an agglomeration of numerous independent small kingdoms and almost totally agrarian. Tribal chiefs, subject to an intricate legal system, ruled these petty kingdoms while groups of these confederations of local kingdoms allied themselves with one another to form provincial kingdoms. In the northern half of the country one of the great kingdoms was that of the Ulaid whose capital was Eamhain Macha close to the modern city of Armagh.

Patrick’s six years of captivity in Ireland would have given him an insight and awareness of the socio-political structures. Wherever possible he would have attempted to adapt the religious values and practices of the Celts to Christianity and to fit into the society in which he was converting from paganism. As an outsider, kinless and without status he had also to seek the protection of the powerful in each local kingdom. Though he often bought the goodwill of kings and their legal advisers, the Druids, this did not guarantee him freedom from danger and persecution. He tells us in his Confession that his life was twelve times at risk, that he was beaten up often and that he daily faced the possibility of robbery, renewed slavery and even death.

Among the saints’ cults of medieval Ireland that of Patrick is paramount. The oldest relevant document, perhaps as early as the 7th century, is “Audite omnes amantes”, a hymn in Patrick’s praise. Three texts in the Book of Armagh are more explicitly devoted to his cult: the Book of the Angel c. 640 is the oldest witness to a claim on the part of Armagh to be the See of St Patrick and Ireland’s primatial church; a life by Muirchú and a “memoir” by Tíreachán (both of whom used written sources) belong to the later 7th century and form the oldest extant horizon of the Patrician legend. The 9th century Bethu Pátraic or Tripartite Life (the first in the vernacular) built upon its predecessors and represents the apogee of Patrician hagiography. Armagh had by now monopolised the cult of Patrick in liaison with the Uí Néill, kings of the north. Some scholars deny Patrick’s association with Armagh pointing out the propaganda motives of his 7th century biographers: Muirchú stressing the founding of the See of Armagh by Patrick, Tíreachán emphasising its primacy over local churches. Patrick does not mention his seat and we are left to reconcile an active travelling bishop with a resident churchman. 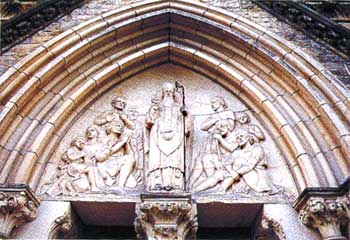 The unbroken cult of the saint in Armagh and the fact that Armagh’s claim to a primacy always remained unchallenged in written sources from the 7th to the 9th century – annals, genealogies, martyrologies & poetry point to Patrick’s association with Armagh. The succession of the comarbada Pátraic ‘successor of Patrick’ is as carefully preserved in manuscript as the lists of kings. The same abbots of Armagh exhibited the insignia of the saint: Patrick’s bell, crozier and ‘canon’. The latter is the Book of Armagh, written in 807 and enshrined in 937. The crozier is first mentioned in 789.

In a lecture at a seminar celebrating the Patrician year of 1961, Father Tomás Ó Fiaich summed up the Patrician tradition in Armagh: “…To the Armaghman, nurtured in the Patrician lore which this ancient city has lovingly handed on from one generation to another, they (the local names) are well known landmarks testifying to the substratum of truth which underlies local Patrician tradition. The spot where St Patrick built the Church of the Relics, his first foundation in Armagh, can be traced first as a monastery and then as a convent until the dissolution of religious houses in the 16th century. Its site can still be pointed out …… in Scotch Street … The hilltop site where Patrick made his principal foundation is where the Church of Ireland Cathedral now stands. Its ancient name of Druim Saileach remained in use under the English form Sally Hill until comparatively recent times”.

Though Patrick’s mission involved numerous setbacks and entailed great personal sacrifice, it was an enormously successful mission. This was due in part to his own Celtic background, in part to his familiarity with the country since his boyhood, in part to the magnetism and determination of the man, but above all, as he himself was the first to acknowledge, to the grace and guidance given to him by Almighty God – “How then does it happen that in Ireland a people who in their ignorance of God always worshipped false gods and unclean things in the past, have now become a people of the Lord and are called children of God?” (Confession).