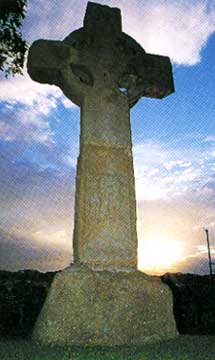 The cross known as Tynan Cross stands by the roadside, opposite the churchyard wall in the village of Tynan. It is said that formerly the monument was within the church grounds, that it fell and that about the middle of the 19th Century it was repaired and set up in its present site. As it stands the monument is a composite one representing parts of two or three crosses. The base, which is somewhat battered and irregular in outline, is a truncated pyramid with a shallow step at the top. It does not appear to have been decorated. The shaft is in two parts. The lower portion has rounded angles and the surface on all four sides is delimited by a roll moulding. The upper portion is a short length of shaft surmounted by an open-ring cross. The head is extensively repaired and restored.