The diocese currently has seven men studying for the priesthood across the seven years of formation.

One of them, Rev. Francis Coll, from Armagh will be ordained a priest
later this year, the first ordination in the diocese since 2005. Fr. Paddy is currently working with a half a dozen prospective candidates for next September, with new contacts being made every few weeks.  He attributes the upturn to several factors – not least that the Church is coming out of the huge cloud that the abuse scandals of the late nineties and early 2000’s had cast over it.  Priests themselves are more confident about their own ministry to the extent that they are beginning, once again, to invite others to consider this way of life, which is still very counter-cultural.
The current financial climate is suggested as a reason why more men might be considering vocation, but Fr. Paddy points out that Priesthood still involves significant personal sacrifices and is not for everyone.  There are stringent entry assessments, and the formation involved is demanding intellectually and personally – not to mention lengthy – normally seven years from start to finish!  One would need to be properly motivated to be able to embark on that kind of journey.  And yet the collapse of the financial institutions and systems in which so many had trusted, has shook people and brought some to ask serious questions about the meaning of their life and the values by which they live. 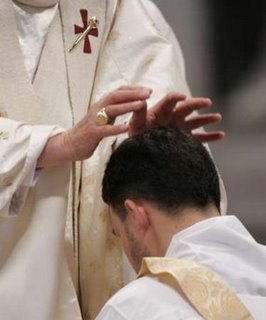 Among those considering priesthood now, may be men in their mid-thirties who, for one reason or another, have been working at other careers for several years, but for whom the idea of being a priest has always been at the back of their minds.  Having had the experience of life in the world of business, construction, or management, they are ready to give priesthood a shot – and the best news, Fr. Paddy states, is that they bring with them a wide variety of experience and interactions which can only help them be better priests in the future.
Fr. Paddy points out that there is no ‘Typical’ time to consider priesthood – its a response to God’s call, so that can happen anytime.  A couple of the current seminarians started immediately after second-level education, while the oldest seminarian is sixty-four, but as an active athlete, is still able to give the younger men a ‘run for their money’ so to speak.  The recent campaign ‘The Year of Vocation’ (which concludes on 3rd May) has helped highlight the need for every baptised person in the Church to follow God’s call in their lives.  This year, the students in the seminary, at Maynooth are holding the first ever ‘Open Day’ to coincide with Vocations Sunday.  Anyone who has ever thought about the priesthood or wondered what the seminary way of life would be like, are welcome to just turn up next Sunday in Maynooth – there is no need to book in advance or to tell anyone of your intention to attend.  The day begins at 2.30pm, and will include talks and a tour as well as Mass and evening meal.
Despite a decline in regular Mass attendance, and a welcome increase in the involvement of a highly trained laity (voluntary and waged), priests are needed today more than ever, Fr. Paddy asserts.  First and foremost in the priest’s duties is to celebrate the Mass (without the priest there can be no Eucharist), Confessions need to be heard, and the sick and dying still need to be anointed;  But in addition, priests are integral to the forming of Christian communities – which is where faith grows and develops.  In this increasingly technologically driven world communities are searching for a connection with each other, and for meaning in what they do.  The priest needs to be a builder of ‘community’ today.  There is also great support for priests – everyday thousands of people pray for their priests and pray for new vocations.  Families too are incredibly supportive of uncles, brothers or sons who decide to explore priesthood – Fr. Paddy said that he was certain that anyone choosing this path would not fall short on encouragement from those around them. 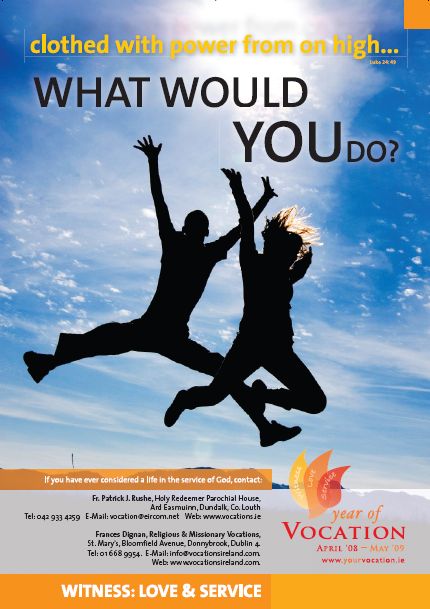 Fr. Paddy concluded by saying that this is a wonderful time to be a priest.  The Church always desires to respond to new pastoral situations, and in order to do this, good men, with great talents and a rich life experience are needed to be key members of the Christian communities of the future.  Priesthood will provide men with a challenge, but also with great satisfaction as they commit their lives to building God’s kingdom in the Archdiocese of Armagh.
Be certain of this, God is still calling!  Calling men to be priests;  to celebrate Mass & the Sacraments; to build community; to nourish souls – God could be calling you!
For more information on Vocations to the priesthood in the Archdiocese of Armagh, please contact Fr. Paddy Rushe, Diocesan Vocations Director Holy Redeemer Parochial House, Ard Easmuinn, Dundalk, Co. Louth, Ireland;   T:  042 93 34259;  E: [email protected] or on the web at www.armaghvocations.org or www.vocations.ie