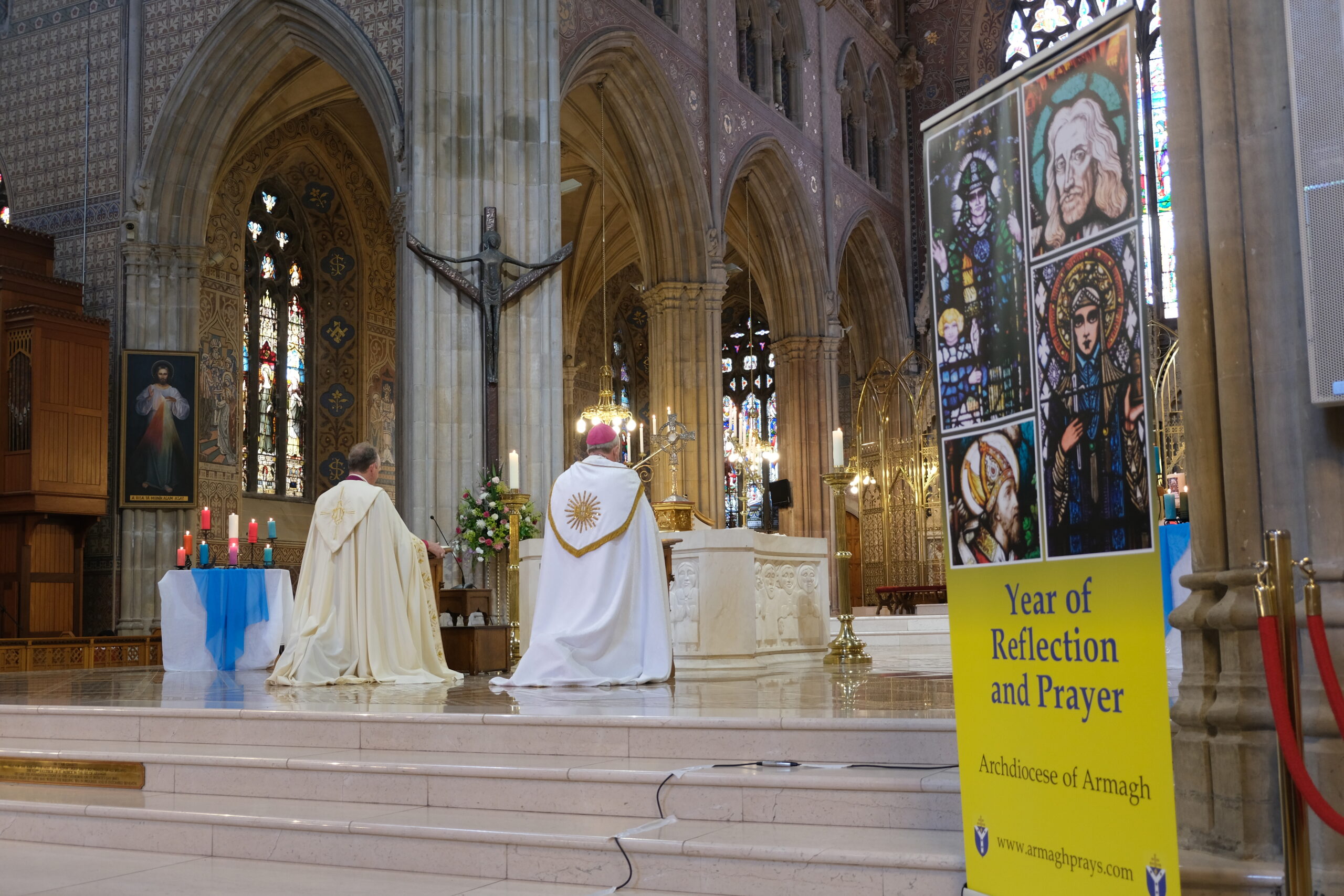 The Year of Reflection and Prayer that began at the end of January 2020 came to a close with a closing ceremony yesterday evening in St. Patrick’s Cathedral Armagh.  The year was scheduled to conclude in February 2020 and amidst the Covid 19 pandemic a decision was taken to extend the year until the end of June 2020.

The Year of Prayer and Reflection was an attempt to listen in the silence to what God was saying to us as individuals and as a faith community. It was not a time for big events, large gatherings, or attention-grabbing speeches, but a time to let God’s Spirit rest in us and to prepare us for the road ahead.

Bishop Michael Router in his homily addressed those gathered in St. Patrick’s Cathedral noting that,

“In many ways it was a blessing that we launched the Year of Reflection and prayer when we did because, at that time, we didn’t know what lay ahead for us. Nothing could have prepared us for all that we have experienced over the past 15 months. In reality quiet reflection and prayer were often the only permitted responses.”

In his address Bishop Michael acknowledged the significant difficulties that all have experienced in the last eighteen months stating that, “The effective closure of most forms of social interaction, schools, workplaces, churches, and entertainment, is something that people younger than 80 years of age had only seen before in disaster movies.”

“Prevented the Church from becoming a remnant of the past retreating into itself and becoming more and more distanced from people.” and that “Pope Francis has identified the model of synodality as a means of responding to the challenges and issues through a slow, yet ultimately more effective process of listening consultation and conversation”

Whilst the Archdiocese is officially closing a ‘Year of Reflection and Prayer’ in the diocese the reflection and prayer never ends and will be an essential element of each step along the way. The next step will be to begin an active period of listening and consultation over the next two years as we prepare for a Diocesan Synodal Assembly in Autumn 2024. The final year before the Assembly will be spent analysing what we have learned through the consultation and conversation and working with the delegates, the elected and selected ‘Some’ from the parishes and other church bodies who will attend the actual Assembly itself.

During this phase they will bring the fruits of the listening, consultation, and conversation to the ‘One’ the bishop and make recommendation for a future diocesan plan. And as Bishop Michael stated “the principle of ‘All’, ‘Some’, and ‘One’ comes into effect and opens up responsibility for the ongoing mission of the Church to all the baptised.”

To assist us in this task of organising the consultation and preparation for the Assembly a core group from around the diocese has been formed and were commissioned at the ceremony in St. Patrick’s. They are predominantly members of the lay faithful, who will work alongside elected members of the diocesan clergy and female and male religious. This group,  will work together to establish the Synodal process here in the local Church of Armagh, a process, that will hopefully address some of the challenges that lie ahead for all of us who take our faith seriously.

As a local Church the Archdiocese of Armagh will also feed into the universal Churches synodal pathway leading to the Synod of bishops in Rome in 2023 and the island wide process that will culminate in a National Assembly or Assemblies in 2026. Over the coming years there will be widespread consultation with everyone inside and outside the Church.  This model of operating as a Church is for the long term it won’t simply be over or set aside when the actual physical Assemblies take place in Rome, Ireland or Armagh.